Keen observers noted the drag queen has frequently attacked the Democrat Party’s leader, Joe Biden, as senile and a liar.

The invite notes that the reception is to feature a performance by Lady Bunny, whose Twitter bio labels her as a “staunch progressive” and “comedienne.”

The retreat is a three-day event being held in Philadelphia. 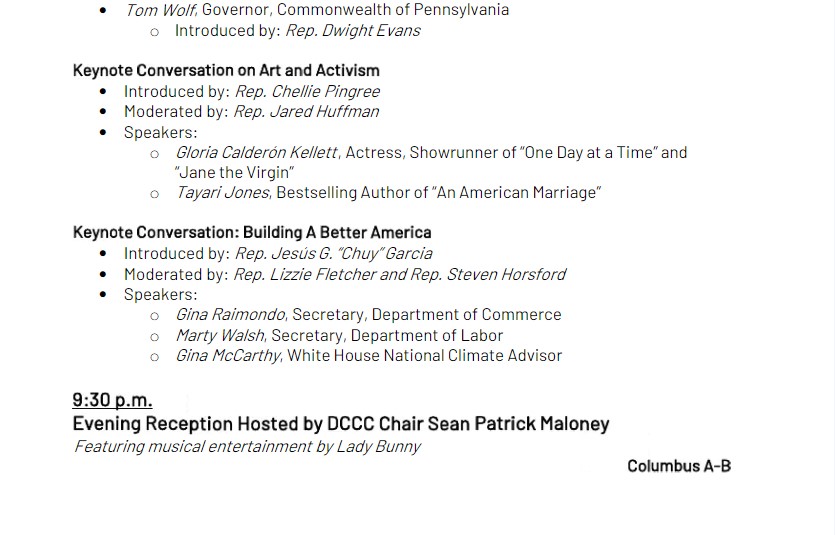 Lady Bunny is an edgy choice for the Democrat retreat no doubt, but perhaps more so for the drag queen’s history of criticizing prominent Democrat politicians.

In a tweet from August of 2019, Lady Bunny dragged then-presidential candidate Joe Biden as “senile” and worried that former President Trump would make “mincemeat” of him.

The Dem frontrunner is senile.
We must beat Trump.

How do these two sentence make sense together? Biden can’t even tell which state he’s in. Trump would make mincemeat of @JoeBiden.https://t.co/eyV7qXePjo

That tweet was in response to Biden mistakenly praising the state of Vermont when asked about his impression of Keene, New Hampshire.

In another social media post just two months ago, the drag queen jokes about a potential comeback for Hillary Clinton, saying: “What will the slogan be? ‘We know Joe’s a corporate hawk and a liar. But unlike Biden, Hillary’s not senile!'”

Wow. If Dems go this route, they are begging to lose. What will the slogan be? “We know Joe’s a corporate hawk and a liar. But unlike Biden, Hillary’s not senile!” pic.twitter.com/NOnzsHxesR

Lady Bunny has been highly critical of other Democrats, including one who is part of the House and could very well be attending the retreat – Representative Eric Swalwell (D-CA).

Lady Bunny roasted him for failing to grasp that vaccinated people can spread COVID just as well as the unvaccinated.

“Are you not aware that vaccinated people can also transmit and get COVID?” the drag queen fired back. “So you’re essentially saying ‘No one should fly.'”

I’m vaccinated and boosted. But are you not aware that vaccinated people can also transmit and get COVID? So you’re essentially saying “No one should fly.” PS: Here’s a pic of you wearing the least effective kind of mask. Maybe YOU shouldn’t be on planes… pic.twitter.com/boTv8RYsCP

The drag queen has also taken Vice President Kamala Harris to task for the administration’s slow roll-out of COVID tests during the omicron variant surge.

“Kamala can’t answer his question about why tests aren’t ready now after two years of pandemic. And one year of Biden,” Lady Bunny wrote.

Kamala can’t answer his question about why tests aren’t ready now after two years of pandemic. And one year of Biden. https://t.co/yw1gKgU5lR

As a “staunch progressive,” I’m sure Lady Bunny has a social media account littered with criticisms of Republican lawmakers. And as a “comedienne,” one expects the envelope to be pushed.

But having entertainment provided to your party’s retreat that has called the leader of that party “senile” is a new level of disrespect.

Democrats are headed to a 3 day “issues” retreat in Philadelphia.

What’s not on the agenda? Any mention of gas prices or the crime crisis.

What is? A discussion on “Art and Activism,” a panel with liberal union leaders, and a drag queen performance.