The Trump White House has come out with a number of bold claims about the economy lately, and so far they’ve all been true.

President Donald Trump said that 3.5 million had gone off food stamps during his Presidency, which is largely accurate depending on when you start the timeline. If we start measuring on Election Day, there’s been a decline of 3.6 million food stamp recipients under Trump. Of course, it would make more sense to begin our time-frame on Inauguration Day, in which the decline is 3.1 million.

Next up, the White House Twitter account posted the claim that “the American economy is continuing its longest monthly streak of job growth in history, with 3.9 million jobs added since President Trump was elected.

The American economy is continuing its longest monthly streak of job growth in history, with 3.9 million jobs added since President Trump was elected.

So, what do the numbers say? Today the Labor Department released figures showing that the economy added 157,000 jobs in July, which extends our current streak of job creation to 94 months and keeping the unemployment rate at 3.9 percent. How does that compare to prior expansions? The Daily Caller’s fact-checking arm ran the numbers and found that the Trump expansion has far-outperformed others.

In fact, the prior record for the longest period of uninterrupted/sustained job growth was “only” 48 months or just over half as long. “The economy has added jobs every month since October 2010, according to the Bureau of Labor Statistics. This is, by far, the longest expansion since the agency started tracking monthly data in 1939,” writes the Daily Caller. 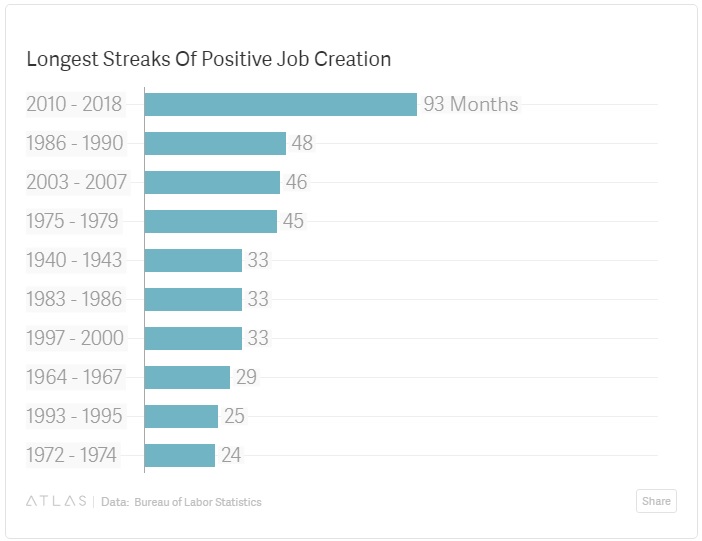 Granted, the length of job creation only gives us one half of the picture we need to paint. Hypothetically speaking, you could have a streak of 100 months of uninterrupted job growth where only 1 job is created per month.

While this expansion has been the longest in recent history, it does appear to rank among the slowest streaks in terms of jobs created per month, but I’ll explain why that’s misleading in just a moment. 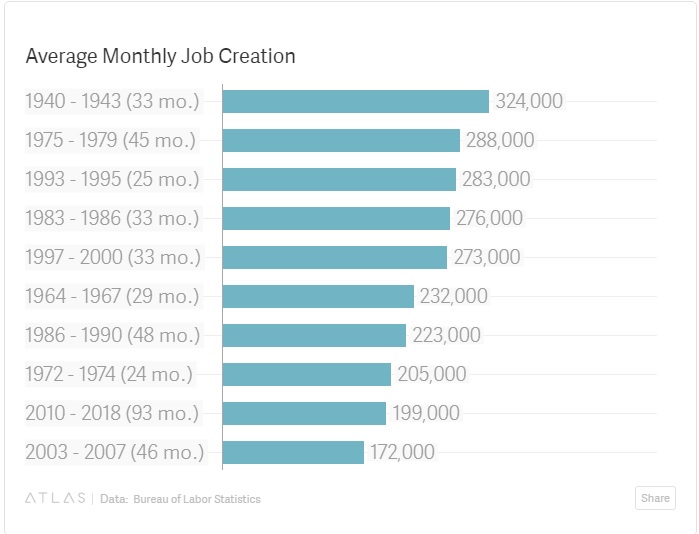 You have to keep in mind that this job creation streak is unique in that it’s largely occurred while the economy was close to or at full employment. There’s always going to be some level of unemployment due to people who work seasonal jobs (like farmers), or temporary unemployment among people moving between jobs, so an unemployment rate of 5% is widely considered to be “full employment” by economists.

On that note, it’s pretty hard to create jobs when everybody already has one, isn’t it? The American economy needs to add 145,000 jobs a month to keep up with population growth, and when almost everyone already has a job, that’s where most job creation is going to come from.

Mad Maxine Waters: We’re Going After Trump’s Tax Returns Even If He Loses