The Trump economy is posting record GDP growth figures, wages are rising, unemployment is at all-time lows, and best of all, dependence on government is down too.

Trump appears to be starting his timeline on Election Day, rather than Inauguration Day. If we start measuring on Election Day, there’s been a decline of 3.6 million food stamp recipients under Trump. Of course, it would make more sense to begin our time-frame on inauguration day, in which the decline is 3.1 million.

That pace of decline is more-or-less consistent with last year’s. We lost 2 million recipients last year and another million in the first half of 2018.

That’s quite the juxtaposition from Obama.

According to The Daily Caller, “there indeed 10.7 million more SNAP recipients in January 2017, Obama’s last month in office, than in January 2009, his first month in office. Under Obama, the number of people receiving SNAP benefits peaked at about 47.8 million in December 2012 following increased enrollment during and after the Great Recession. By November 2016, there were 43.2 million people on SNAP – a decline of about 4.6 million.”

While Obama left office with food stamp usage on the decline, it was still overwhelmingly higher than when he took office, as you can see in the chart below. 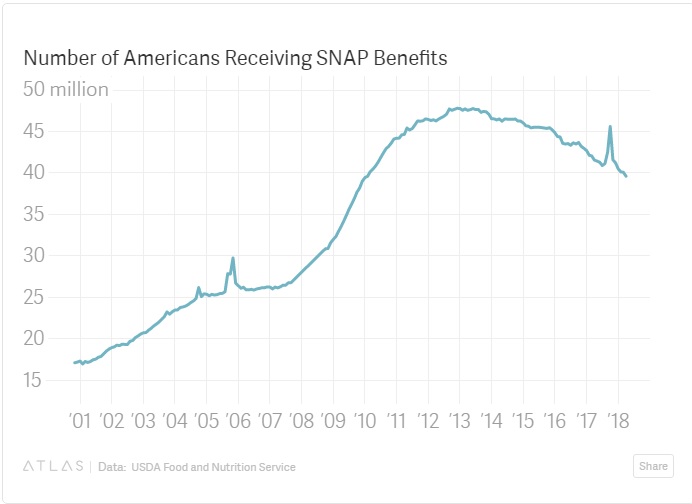 Much of the problem stemmed from Obama’s Department of Agriculture suspending the work requirement to receive food stamps. Such a change in policy would make sense as a temporary measure during a recession, but the Agriculture Department let it up to the states to re-implement their work requirements. States that have re-implemented those requirements have seen massive declines in food stamp usage among able-bodied adults; -85% in Alabama, -58% in Georgia, -75% in Maine, among others.

Isn’t work for welfare just common sense? It’s about time it made its long-overdue return.