It wasn’t until last month that the public finally saw the federal data on illegal immigrant crime.

It’s always been the case that legal immigrants tend to commit crimes at lower rates than native born Americans – which is exactly what we would expect in any country with immigration standards. First of all, since legal immigrants have to pass a background check, we guarantee that it’s 100% law-abiding people who come in. It goes without saying that people who’ve been law-abiding their entire lives don’t tend to commit crimes later, while those who have committed crimes are very likely to re-offend.

Second, it’s an extremely time-consuming process to immigrate legally to America. Most people don’t go through a 5-10 year process to then ruin it all by committing a crime.

Since we didn’t have much data on illegal immigration, it wasn’t uncommon for liberal to extrapolate from the data on legal immigrants, and pretend that illegals must have the same moral character. As federal data released in December showed, illegals are far over represented when it comes to serious federal crimes: 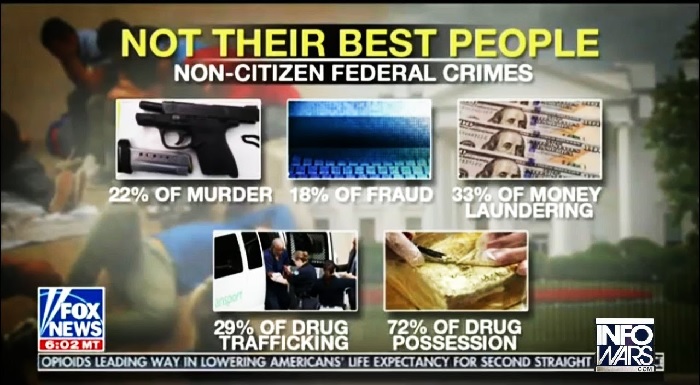 And that’s just at the federal level! Now we have some state data in, and it’s just as shocking.

According to the Washington Times,

The crime rate among illegal immigrants in Arizona is twice that of other residents, Attorney General Jeff Sessions said Friday, citing a new report based on conviction data.
The report, from the Crime Prevention Research Center, used a previously untapped set of data from Arizona that detailed criminal convictions and found that illegal immigrants between 15 and 35 are less than 3 percent of the state’s population, but nearly 8 percent of its prison population.

Additionally, the nature of the crimes they committed was much more vicious, which would be expected given the disproportionate participation in gangs among illegal immigrants.

Among nearly 4,000 first- and second-degree murder convictions, undocumented immigrants accounted for nearly 13 percent — significantly higher than their percentage of the population. Legal immigrants, by contrast, were less than 1 percent of convicts. Native-born made up the rest.

He continued: “Tens of thousands of crimes have been committed in this country that would never have happened if our immigration laws were enforced and respected like they ought to be.”