The Defense Department last week announced Richard Torres-Estrada is now the “Chief of Diversity and Inclusion” for America’s Special Forces, a man who once compared Trump to Hitler with a phony photo mockup.

U.S. Special Operations Command (USSOCOM) revealed that Torres-Estrada had been serving in the role since March 1st.

“We look forward to his contribution in enhancing the capabilities and effectiveness of #SOF through diversity of talent, helping us recruit the best of the best,” they tweeted.

The hire is not without controversy.

Fox News host Tucker Carlson notes that a perusal of Torres-Estrada’s Facebook page shows a lack of inclusion with posts showing “an attack on the police” and “crude BLM propaganda.”

USSOCOM welcomes our new Chief of Diversity & Inclusion, Mr. Richard Torres-Estrada. We look forward to his contribution in enhancing the capabilities and effectiveness of #SOF through diversity of talent, helping us recruit the best of the best. #QuietProfessionals pic.twitter.com/Z6aJnz91mx

Carlson went on to explain that Torres-Estrada’s Facebook page also includes “a picture of Donald Trump holding a Bible in front of a church.”

“Next to Trump is a photograph of Adolf Hitler,” he added. “The point is, they’re the same. So, this is the guy who now oversees hiring for the SEALs.” 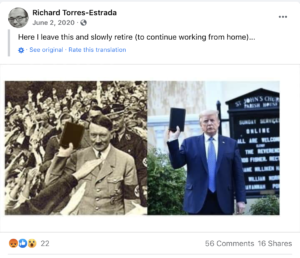 The insinuation being that Donald Trump, who was President at the time, is somehow comparable to a man who executed millions of people.

Is that the kind of guy you want hiring in the armed forces? Someone who thinks Trump and his supporters are evil?

Not only is the comparison reprehensible – Trump simply walked to a church that had been set on fire the night before by rioters – but it’s a doctored photo.

A Reuter’s fact check noted that “the image of Hitler has been digitally altered; in the original he is not holding anything.”

“The image of Adolf Hitler was doctored so that it looks like he’s holding a book in a similar pose to Donald Trump,” Politifact writes.

Comparing a former president to Hitler on social media should disqualify you from being hired at the U.S. Special Operations Command.

But Richard Torres-Estrada was hired anyway.

I sent a letter to the Defense Secretary about his posts, check it out:
https://t.co/zJDsW4Hbfq

Carlson blasted the United States military for having “gone full woke,” citing Torres-Estrada as an example.

“If you’re wondering whether our military leadership has gone woke, consider that question settled for good,” he said after mentioning the Hitler post.

“The Pentagon is now the Yale faculty lounge, but with cruise missiles. That should concern you,” added Carlson.

According to the Daily Caller, USSOCOM reported that an investigation into Torres-Estarda’s posts has been undertaken.

“We are aware of the situation, and the command has initiated an investigation,” a spokesman told the outlet.

Carlson’s commentary on the dangers of a military concerned with being woke as opposed to finding the best people to carry out the mission has raised the ire of the Pentagon recently.

Drama TV – my response to Mr. Carlson’s comments on women in the Armed Forces. @TuckerCarlson pic.twitter.com/acix7CFLO9

While the powers that be continue to pitch diversity as strength rather than actual strength, a simulated war game between China and the United States set a little over a decade into the future showed America would lose a war and “lose fast.”