Tonight, President Trump is set to unveil his pick to be the next justice on the Supreme Court. Anticipation is high, as everyone in Washington tries to guess just whom the nominee will be. (RELATED: Oops! Did Orrin Hatch Just Leak President Trump’s SCOTUS Pick? Here’s The Clue He Just Shared.)

There’s a lot of speculation about whom Trump will choose, and it’s due to the President himself being undecided on the matter. According to Jonathan Swan of Axios, Trump has been prevaricating on the choice in recent days, going back and forth between the finalists. Swan writes that Trump “still truly hasn’t made up his mind and is still vacillating in phone calls to friends and advisers between his “final four” judges: Brett Kavanaugh, Amy Coney Barrett, Thomas Hardiman and Raymond Kethledge.”

This is a monumental decision for President Trump and he wants to get it right. The next Supreme Court justice will have a significant hand in shaping our country’s future. (RELATED: With Kennedy’s Retirement, It’s Time to Overturn Roe v. Wade.)

The Wall Street Journal is reporting that Trump may have zeroed in on his pick, and it may come as a surprise to conservatives. Two potential nominees have possibly been ruled out: Judge Amy Coney Barrett and Judge Raymond Kethledge.

Trump’s reported calculation is that Barret’s devout religious views may imperil her nomination process. As for Kethledge, Trump regards him as low energy.

The latest on SCOTUS from @peterwsj @louiseradnofsky: Amy Coney Barrett’s prospects seem to be fading because of her outspoken socially conservative views, while Trump has voiced reservations that Raymond Kethledge doesn’t show the right amount of energy. https://t.co/l7KHsexdHo

This leaves judges Brett Kavanaugh and Thomas Hardiman as the final two. And if internet betting odds are to be believed, Brett Kavanaugh will likely be Trump’s choice (via PredictIt.org): 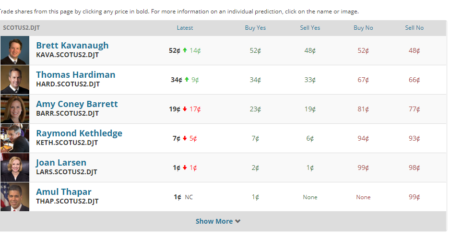 It’s a shame that Barrett has been all but ruled out. She would have made a terrific justice. Her religious views shouldn’t be held against her, but Democrats are already spoiling for knock down, drag out fight over the nominee. Barrett’s devout Catholicism would have been made a big issue among bigoted Democrats.

Regardless of his pick, President Trump is about to make yet another indelible mark on our country with his SCOTUS nominee. Let’s hope he picks the most qualified man or woman for the job.

Jimmy Carter: Jesus Would Not Approve of Abortion