The Secret Service’s warning line must be ringing off the hook lately.

Ever since the media blew up over the Trump Administration’s “zero tolerance” immigration policy that has resulted in family separation at the U.S.-Mexico border, violent threats from unhinged leftists have reached a fever pitch.

Then, President Trump himself was met with his own batch of profanity by a nasty congressional intern when he spoke with Republicans in Congress. (RELATED: Watch: Unhinged Democrats Heckle, Scream Profanities at President Trump).

Actor Peter Fonda, a man not exactly known for having a temperate personality, decided to get in on the action. With his caps-lock button pushed firmly into the “on” position, he rattled off a disturbingly detailed tweet about kidnapping Barron Trump.

WE SHOULD RIP BARRON TRUMP FROM HIS MOTHER’S ARMS AND PUT HIM IN A CAGE WITH PEDOPHILES AND SEE IF MOTHER WILL WILL STAND UP AGAINST THE GIANT ASSHOLE SHE IS MARRIED TO. 90 MILLION PEOPLE IN THE STREETS ON THE SAME WEEKEND IN THE COUNTRY. FUCK 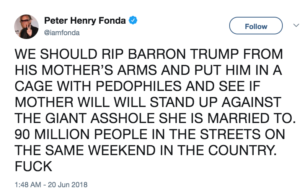 Needless to say, First Lady Melania Trump wasn’t pleased with the threat against her son. And, according to her office, Secret Service has been notified of the threat.

Benny Johnson of the Daily Caller got the exclusive scoop:

Spokesperson for the first lady Stephanie Grisham told The Daily Caller that the Secret Service has been “notified” of the threat.

“The tweet is sick and irresponsible and USSS has been notified,” Grisham said.

This kind of language is unacceptable. Liberals are always willing to push rhetorical boundaries to get what they want. Fonda wanted attention over the immigration crisis taking place at our southern border. It looks like he got attention, though, I’m sure it wasn’t the kind he was expecting.

And just so we’re clear: If Fonda attempted to take Barron away from Melania, you can bet he’d get a 5-inch stiletto heel straight to the face.