So much for the tolerant left.

Liberals have found a new boogeyman in Immigration and Customs Enforcement (ICE) for doing exactly what they’ve been doing since the division was created. For all the rhetoric about illegal immigrant families being torn apart, it’s a bit rich seeing the Left try to claim the moral high ground on the issue. If they were truly outraged on this issue on the genuine belief that human rights were being violated, you’d think they would’ve spoken up a bit more when a Democrat was in the office.

Apparently not – and I mention that specifically because Obama held more than twice as many immigrant children in shelters than Trump. (RELATED: 3 Myths About The Family Immigration Policy, Debunked).

HHS spokesperson Kenneth Wolfe said there were 10,852 undocumented children in HHS custody, but under Obama in 2013, that figure was 25,000 across 80 shelters. (RELATED: Trump’s ‘Zero Tolerance’ Immigration Policy Isn’t New – Obama Did the Same Thing).

But now that Trump is President, this is suddenly a problem. Even long-forgotten Leftist groups like the short-lived Occupy Wall Street are coming out of the woodwork to weigh in. In a disturbing parody of a CPR instructional guide, Occupy instructs their supporters what to do in case they encounter an ICE agent. That includes grabbing them from behind and “pushing your knife into his chest with an upward thrust,” and “reach[ing] into his chest and pull[ing] out his still beating heart.” 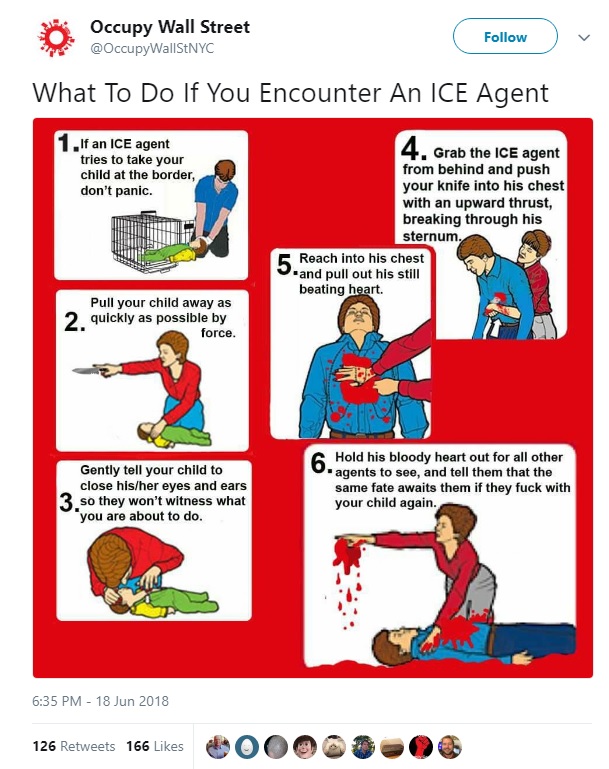 Most responses mocked the cartoon:

Your raging stupidity just keeps driving more people away from the Left. You're a fantastic weapon for the Conservatives. Keep it up!

Who brings a knife to an ICE raid? That knife better have a 30 round clip and a bump stock.

Your cute graphic missed the part about being shot when the knife is brandished.

A common charge that liberals are making against ICE agents is that they’re “racist” – which ignores that Hispanics are the most over-represented demographic when it comes to those employed by agencies tasked with border security. To summarize just some of the statistics:

But is that really a surprise? It’s likely the case that those agents come from families that immigrated to America themselves in the past – legally.