Kyrsten Sinema Responds After Being Harassed In Bathroom By Protesters: ‘Wholly Inappropriate’

Sen. Kyrsten Sinema has responded after an incident in which far-left activists confronted and followed her into the bathroom at Arizona State University.

Activists recorded themselves following Sinema into the bathroom, demanding that she vote in favor of President Biden’s signature $3.5 trillion “Build Back Better” legislative package.

Her reply was first reported by The Daily Beast.

Sinema Blasts Activists For Recording Her In The Bathroom

Sinema said in a statement on Monday, “Yesterday’s behavior was not legitimate protest.”

“It is unacceptable for activist organizations to instruct their members to jeopardize themselves by engaging in unlawful activities such as gaining entry to closed university buildings, disrupting learning environments, and filming students in a restroom,” Sinema wrote.

Sinema was confronted by activists belonging to the group Living United for Change in Arizona, who demanded she support Biden’s Build Back Better agenda, which includes one of the largest spending bills in U.S. history.

The activists had no problem following the senator into the bathroom on Sunday, and recording the whole incident.

While many on the right appeared to denounce the behavior, some on the left outright defended it.

The author of the piece, Ashley Reese, justified the behavior by calling Sinema a “political menace.” 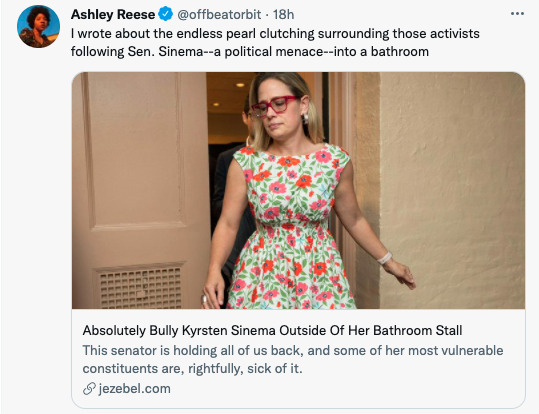 President Biden said the activists went too far on Monday, but also said “it happens to everybody.”

Along with Democrat Sen. Joe Manchin, Sinema has also become a focus for progressives due to her hesitancy to support her party’s far-left spending agenda.

🔴BREAKING: Blanca, an AZ immigrant youth confronts @SenatorSinema inside her classroom, where she teaches @ ASU. "in 2010 both my grandparents got deported bc of SB1070…my grandfather passed away 2 wks ago & I wasn't able to go to Mexico bc there is no pathway to citizenship." pic.twitter.com/JDZYY2fOD2

Sinema also said in her statement, “In Arizona, we love the First Amendment.” The Democrat noted that she and her office have met this particular group  “several times” since she became a U.S. senator.

Sinema called out the behavior she experienced from these activists on Sunday as “wholly inappropriate.”

“It is the duty of elected leaders to avoid fostering an environment in which honestly-held policy disagreements serve as the basis for vitriol,” Sinema said.

President’s ‘Word as a Biden’ Isn’t Worth Much, His Record Shows