During any natural disaster, you’re bound to find at least one religious figure who will attribute it to a form of divine judgement.

After Hurricane Sandy struck, the pastor Rev. John McTernan wrote in a now-deleted blog post that “God is systematically destroying America.” The reason God was so ticked off, he claimed, was “the homosexual agenda.” McTernan previously blamed gay Americans for Hurricane Isaac, linking its arrival to the annual Southern Decadence celebration in New Orleans.

In both cases, he was rightly mocked (hence why the aforementioned blog post has since been removed). After all, how do you politicize natural disasters? Evidently, it’s not something the religious right is guilty of exclusively. We did, after all, have the following viral Facebook post claiming Trump is manipulating the weather to kill minorities as exhibit A. 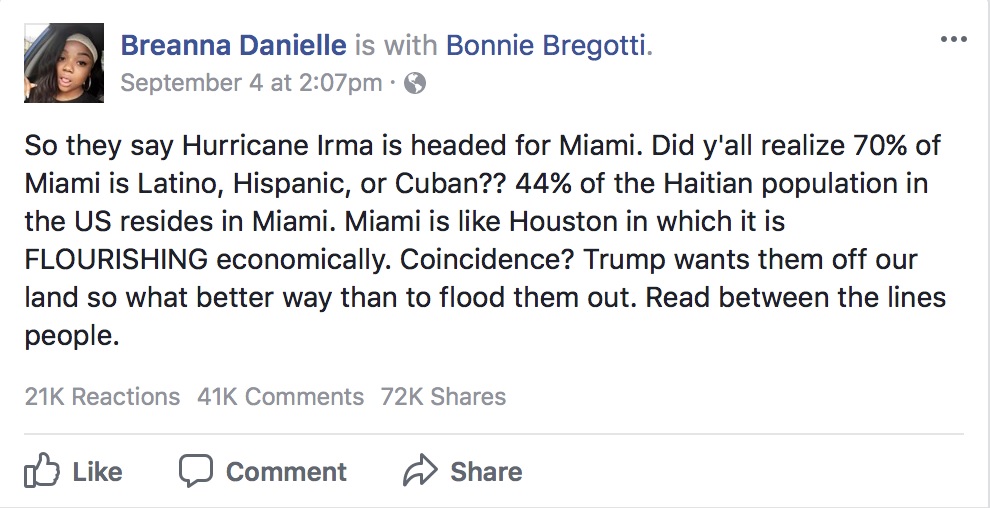 You can relax in knowing that the post went viral because people found the “theory” hilarious – not true.

And it’s not just random nobodies on the internet entertaining delusions of grandeur in politicizing Hurricane Irma. Among those who forgot that “hurricane season” is real and somehow think that President Trump is responsible for the devastation is actress Jennifer Lawrence.

In an interview with the British “Channel 4,” Lawrence said she’s been having “an end-of-days feeling” lately. And, of course, she thinks that her observation is “truer” in the U.S. “than anywhere else” in the world.

Then things veered into conspiracy territory.

After being pushed by the reporter to reveal her disdain for President Trump, Lawrence said, “You know, you’re watching these hurricanes now, and it’s really hard, especially while promoting this movie, not to, not to feel Mother Nature’s rage, or wrath.”

She went on: “You know, I’ve heard things and seen things on TV in my own country that devastate me and make me sick, and it’s just really confusing.”

The interviewer asked if Lawrence thought Trump was confusing. She replied “I don’t find him confusing. I think I know exactly what he is.”

Remember, liberals are supposed to be intellectually superior to conservatives. Yet, more often than not, they believe in more zany things than children with big imaginations.

Hillary Argues in 2014 That Illegal Immigrant Children Should Be Deported