The newly released ‘JFK files’ are full of juicy information about the assassination, and subsequent investigation, of the late president. One of the more interesting items uncovered was the fact that domestic terrorist and Obama buddy Bill Ayers was under federal watch.

Hidden in the files is a neat little tidbit that has a lot of bearing on today. There has been a conspiracy theory going around for some time that the Central Intelligence Agency used to recruit journalists to spread propaganda under the guise of reporting. This was called “Operation Mockingbird.” According to Wikipedia, congressional investigations in the 1970s proved that the CIA did in fact use journalists to spread propaganda. But the term “Operation Mockingbird” was never used.

The JFK files may have just provided more proof of this secret CIA program. Check out the following tweet:

The CIA recruited journalists to publish #FakeNews according to the #JFKFiles pic.twitter.com/DsUUeqloQF

This specific file can be found here. If you browse through the correspondence, you’ll see a conversation between then-congressmen Walter Fauntroy and CIA Director Stansfield Turner. In the file, Stansfield announces the CIA will no longer employ “any full-time or part-time news correspondent.” The memo also stipulates the Agency will “bring existing relationships with individuals in these groups into conformity with this new policy.” 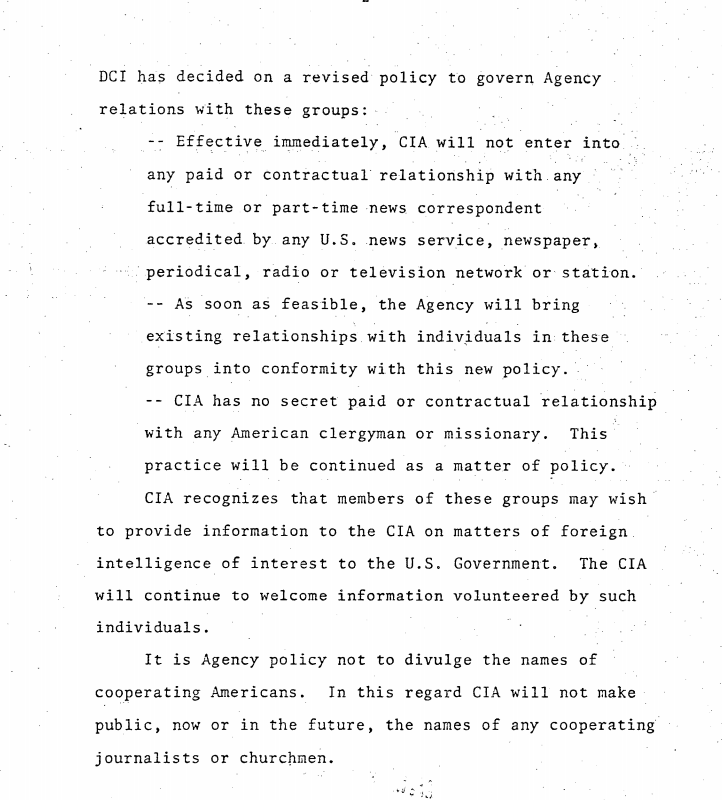 Very intriguing. It’s clear the CIA was involved in the hiring of journalists. But for what reason? And what relevance does this have on today?

Well, think about “fake news” and all the leaks being used against President Trump.

Former FBI Director James Comey admitted to leaking information to his friends in the media in order to stoke demand for a special counsel to look into Trump over his alleged Russia connections. This was a high-ranking government official using the media as a unwitting tool to further his own ends.

Or consider this week’s revelations about the Hillary Clinton campaign and the Democratic National Committee helping to fund the notorious anti-Trump dossier compiled by an ex-British spy with Russian connections. The Hillary camp denied it had anything to do with the debunked documents. That was a lie.

But then, that wasn’t the strangest part. Along with the Clinton revelations, we also learned that the FBI actually helped pay for the dossier as well. And James Comey actually cited the dossier as a reason to appoint a special counsel to look into Trump, despite most of its allegations being untrue.

And let’s not pretend that the journalists who go along with these schemes are totally innocent. They aren’t stupid. They know what they’re doing. It’s not a conspiracy when former President Jimmy Carter says that no president has been subject to this much negative coverage. And it’s not insane theorizing when all the data points to a president under assault by a vicious press corps.

The media hates Trump. It doesn’t get any simpler than that. The executive editor of the New York Times actually had to admonish his reporters to stop sharing their biased, partisan opinions on social media.

So, for months the Clinton campaign lied about the origins of the dossier. Journalists were had. So what do they do? Many went to bat for Clinton, saying it was no big deal. And this was after they thought Donald Trump Jr. meeting with a Russian lawyer in Trump Tower was some kind of collusion.

.@JoyAnnReid: ‘I don’t make the rules, I just change them when politically expedient’#TrumpDossier pic.twitter.com/ZrzugEgS4S

So put it all together: the media is full of Trump haters and officials in the highest levels of our government are willing to leak information to the press. What does that tell you?

President Trump doesn’t need it spelled out for him. He knows there are people within the government who want him to fail.

I have been asking Director Comey & others, from the beginning of my administration, to find the LEAKERS in the intelligence community…..

Asking Comey to stop the leaks was like asking an arsonist if he burnt down the smoldering building he’s standing in front of. With the unprecedented amount of leaks being used to undermine this president, it’s clear that the U.S. intelligence community are willing and able to use information as a weapon. And our media class is only too willing to play along.

Just consider: The head of the FBI used fake news and manipulated the media to trap a president. Now Trump is under intense investigation. I’m guessing Comey didn’t pull that trick out of his hat. He had to learn it somewhere. Maybe it was from the CIA’s previous use of journalists as patsies to push their agenda?

It’s a question worth considering.

What do you think? Was Operation Mockingbird real? Should our government intelligence agencies never use the media to push an agenda? Tell us your thoughts below and share this incredible revelation over Facebook now!

Bill O’Reilly In Talks To Return To TV