Chicago’s Emanuel Claims Chicago is ‘Off Limits’ to Federal Law

After President Trump announced he would end DACA amnesty, the hyper-left mayor told illegal immigrants that federal law doesn’t apply to Chicago, and that the city was “off limits” to President Trump, like that would ever happen.

Chicago Mayor Rham Emanuel declared Chicago a “Trump-free zone” in the wake of the president’s decision to end the Deferred Action for Childhood Arrivals (DACA) program on Tuesday.

Emanuel addressed DACA enrollees, telling them that Chicago was open to them. “This is your home, and you have nothing to worry about,” he said.

“Chicago, our schools, our neighborhoods, our city, as it relates to what President Trump said, will be a Trump-free zone,” Emanuel then said.

Chicago is a sanctuary city and is currently suing the Department of Justice over efforts at the DOJ to strip sanctuary cities of federal funding.

To all #DREAMers: You are welcome in the City of Chicago. This is your home. Come to school and pursue your dreams. #DACA #ChicagoisOne pic.twitter.com/YbnEpxqbuG

Well, Rahm, what are you going to do for the people of Chicago and Cook County? More taxes? And what about all of the gang violence and senseless shootings? If these individuals were brought here illegally, let them set up their paperwork and go through the proper channels and stop messing around.

Here is a written statement from the Chicago Mayor’s office: 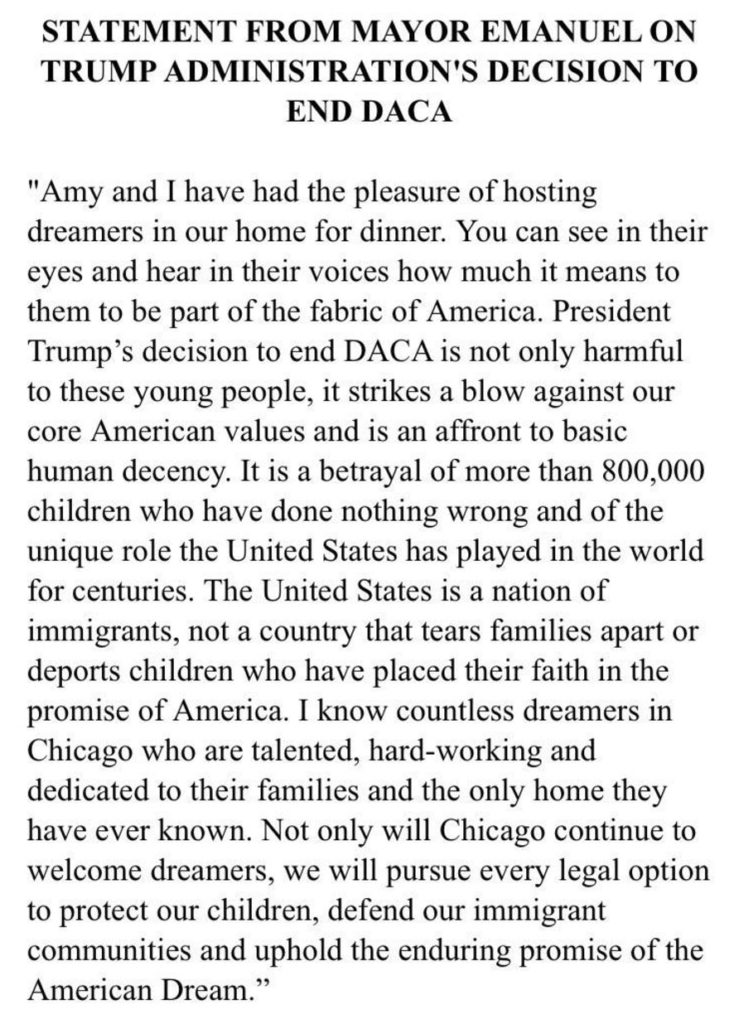 I know countless children born right here in America who don’t have access to a quality public school system. Maybe Rahm should mind his own watch and care for his citizens first. Then we call all tackle these issues together.

Trump is right! This loophole needs to be closed. Come here legally. If you were brought here illegally, it’s still illegal! Period. This letting people stay without becoming citizens is wrong, and Trump hit the nail on the head.

There’s no way Emanuel will keep Trump out of Chicago – and if you believe like I do, SHARE this article on your Facebook/Twitter timeline.

Also share your voice below in the comment section on what felt when you saw Rahm give the city of Chicago that ridiculous pledge.