Joe Biden’s presidential campaign is catching flak after a new ad depicts a wealthy venture capitalist and Democratic Party contributor as a struggling bar owner, according to a report by Fox News.

The ad ran on CBS during Sunday’s football games and featured the proprietor of a Michigan bar called the “Blind Pig” detailing about how much the COVID-19 pandemic has hurt his business.

The ad itself appears to have been taken down off YouTube. Several sites featured the ad. Here is how it now appears on MLive: 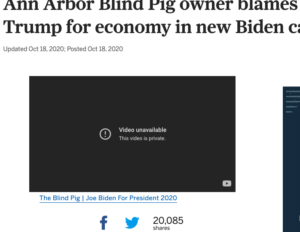 ‘Bar Owner’ Blames His Bar Being Shut Down On… Donald Trump?

Ignoring the fact that it was Democratic Gov. Gretchen Whitmer’s draconian lockdown measures in Michigan that has hurt so many businesses, the bar owner instead blamed President Donald Trump.

“For 50 years, the Blind Pig has been open and crowded, but right now it’s an empty room,” Blind Pig co-owner Joe Malcoun said in the ad.

RELATED: Obama Claims Trump Is Trying ‘To Keep People From Voting’ In New Ad For Biden

“We don’t know how much longer we can survive not having any revenue,” he continued. “A lot of restaurants, bars that have been mainstays for years will not make it through this.”

“This is Donald Trump’s economy,” he declared.

It is? It’s not Gov. Whitmer’s economy?

For the record, President Trump has not ordered the Michigan governor to shut down her state.

He does not have the authority to do so, even if he wanted to.

“There’s no plan, you don’t know how to move forward,” Malcoun said. “It makes me so angry.”

He added, “My only hope for my family and this business and my community is that Joe Biden wins this election. That’s the kind of person we need.”

Poor guy. Sounds like he is downtrodden and needs help, right?

Fox News reports, “After inheriting money from his wife’s grandfather, which he likened to ‘winning the lottery,’ Malcoun said he founded CKM Capital Partners in 2013 and eventually became an ‘angel investor’ in local tech companies, according to a 2018 interview with Click On Detroit.“

“He’s also served as CEO of Nutshell, a customer relationship management software company, since 2014, and under his leadership the firm raised at least $5.5 million in angel and venture capital, according to his Crain’s Detroit Business 40 under 40 profile,” Fox News noted.

It was also reported that, “According to Federal Election Commission data, Malcoun donated $5,000 to Biden For President in July.

It turns out the struggling bar owner is in reality a well-to-do investor, CEO, and wealthy Democratic activist.

When Biden traveled to Kenosha, Wisconsin in September, his campaign team organized a meeting with community members who would be able to ask him questions.

The visit came in the aftermath of a police shooting, subsequent riots, and citizen shootings during protests.

One attendee admitted she was handed a script.

“I’m going to be honest Mr Biden, I was told to go off this paper but I can’t,” the woman said.

Woman at Biden event in Kenosha says she was given a "paper" telling her what to say.

"I'm just going to be honest, Mr Biden. I was told to go off this paper, but I can't." #kenosha #truth pic.twitter.com/PzbqskBVID

“We need the truth, and I am part of the truth. I was born here, raised here… I have to give you the truth of the people,” she continued, explaining the “difference between a protestor and a rioter.”

With only two weeks to go, expect more scripted phoniness.

And don’t forget – there is a presidential debate Thursday night.