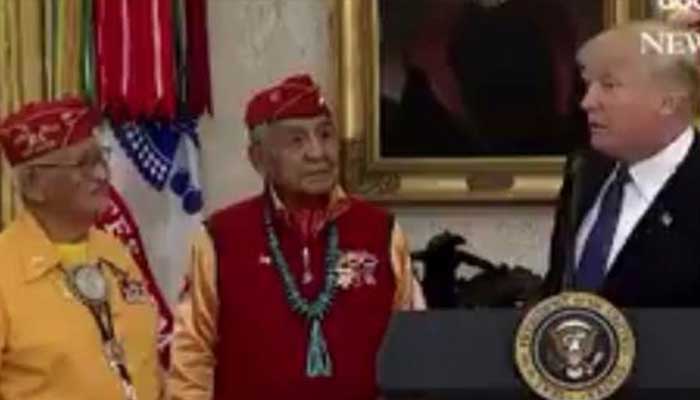 Senator Elizabeth Warren (D-MA), was so offended that President Donald Trump referred to her as “Pocahontas” while honoring Native American code talkers, she was almost in tears. Although, that certainly didn’t stop her from signing multiple fundraising emails, using the national headlines to raise campaign cash.

As Trump said at the official ceremony, “I just want to thank you because you are very, very special people. You were here long before any of us were here. Although, we have a representative in Congress who has been here a long time, longer than you, they call her ‘Pocahontas.'”

The following day, White House Press Secretary Sarah Sanders reminded the press what the real scandal is: “I think what most people find offensive is Senator Warren lying about her heritage to advance her career.”

Now, one of these legendary war heroes and Navajo code talkers, Thomas Begay, broke his silence about what he thinks about Elizabeth Warren. He made the comments to reporter Joshua Green at the airport while leaving Washington, D.C.

What he says is epic: “The Marines made us yell ‘Geronimo’ when we jumped out of planes and that didn’t offend me either.”

In other words, Warren is being hyper-sensitive and should get over it. And he has a good point! Did liberals care when Hillary Clinton labeled half the country as “deplorable” and “irredeemable?”

Just met Thomas Begay who was "puzzled" but not offended by Trump's Pocahontas quip: "The Marines made us yell 'Geronimo' when we jumped out of planes + that didn't offend me either." pic.twitter.com/6wOonggocE

Trump knew what the reaction would be to his comments, and the liberal media played right into his plan. Trump isn’t fixated on Warren’s race. Instead, he’s forcing the media to cover a shameful lie Warren continues to defend, which resulted in a $350,000/year job at Harvard Law School.

Thomas Begay cut right to the chase. He’s a war hero and has no time for liberals who want to politicize this ceremony. He was in D.C., to be honored for his service and enjoyed his time with President Trump.