A daily tracking poll from Rasmussen Reports indicates that President Trump’s approval rating has jumped to 50 percent, a solid five points ahead of where Barack Obama sat at the same exact point during his presidency.

The poll does note that anger towards the President remains the norm with 35 percent who say they ‘strongly approve’ of Trump’s performance, while 41 percent ‘strongly disapprove.’

Still, such news must be sending Democrats and their liberal base into absolute shock. 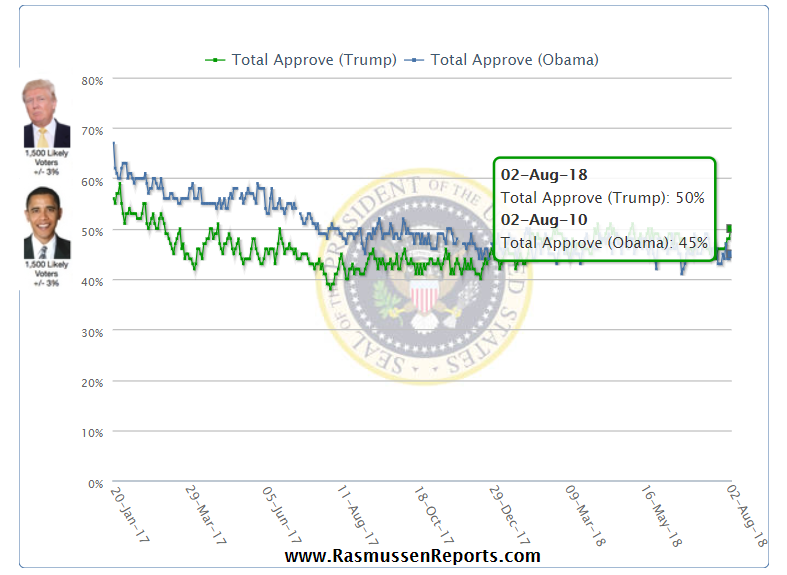 Trump sat at 44 percent approval on July 22nd but has seen a boost in his numbers since, much to the chagrin of a media that thinks he and his supporters are just a bunch of toothless hillbillies.

As we reported last month, the upward trend in the President’s approval rating is thanks in large part due to an increase of support amongst Hispanic Americans.

How’s that for a narrative deflator?

The media pulled out all of the stops to overhype a manufactured crisis in illegal immigration policy – ‘family’ separations – and he still managed to be on the receiving end of a ten-point spike in Hispanic support.

In addition, Trump’s support is well ahead of the 46.1 percent of the vote he received from Americans during the 2016 presidential election.

It’s also far and away what his predecessor had at the same exact point in his first term. Barack Obama was held to 45 percent on August 2nd, 2010.

Media coverage of President Trump has been overwhelmingly negative, while they sang the praises of Obama throughout his time in the White House.

Can you envision a scenario in which the media were even vaguely as impartial with this President? His approval ratings could be in the high 50s or 60s if that were the case.

As a reminder, here are a few of the glowing headlines from the mainstream media in 2010 …

Imagine if the media for one moment gave President Trump credit for ending the threat of war on the Korean peninsula, or wrote a glowing article about him as a father, or touted his economic recovery through tax cuts, slashing of regulations, and historically good unemployment numbers.

The media fawned all over Obama during his entire time in office, but even more so during his first few years when he held a supermajority in Congress.