Report: Media Coverage Of Trump Has Been 90 Percent Negative

I’ve been talking about this on my radio show for the longest time and now there’s data to show that I am right.

The network news organizations have been pushing negative coverage of President Donald Trump during the 2016 Presidential Election, and every single day since his inauguration. Trump rarely gets positive coverage from the media, and has to use his own methods to get the word out about his successes and things he’s working on for the American people.

I think the media decided to fill everyone’s head with full-time negative coverage to turn voters against the President so they could deliver their final blow and try to force him from office, but it’s not working because Trump is too tough and battle-tested to accept defeat.

“The media’s coverage of President Donald Trump and his administration since September has been 90 percent negative, according to a study released by the Media Research Center on Monday.

Trump has taken to Twitter often to blast members of the media for their false reporting about his administration and campaign, and the press has become fixated with trying to take down Trump by repeatedly reporting on stories that paint Trump in a negative light.

The coverage of Trump on “ABC, CBS and NBC evening newscasts in September, October and November was more than 90 percent negative,” according to the report.” 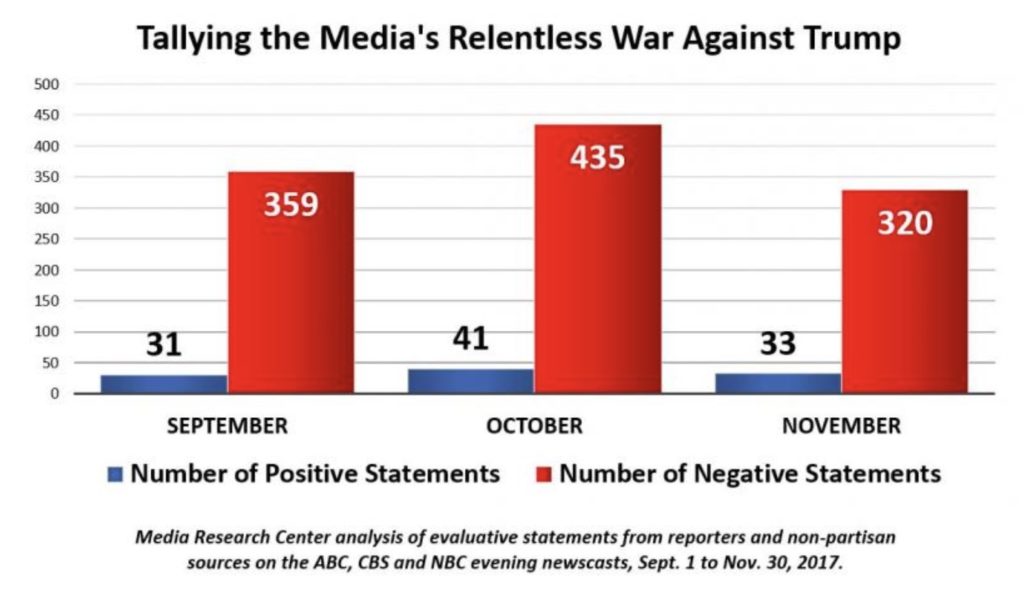 Washington insiders are so desperate to destroy our president. He is a threat to their power and wealth. In fact, he’s a threat to the entire machine that allows them to steal the vitality from our country. That makes President Trump an existential threat to their entire way of life.

CNN has done a lot of whining lately about how nobody trusts them anymore. They have nobody but themselves to blame. If I want to watch a bunch of monkeys in a cage throwing their poop around, I’ll go to a zoo. I don’t need to turn on CNN and watch them doing the same thing.

The media’s coverage of President Donald Trump and his administration since September has been 90 percent negative, according to a study released by the Media Research Center on Monday. #MediaBias #Trump

I never watched CNN much in the past. And the way they’ve been carrying on, with their false reports, false witnesses, and false stories? I don’t watch them at all anymore, and I never will watch them ever again at any point in time between this day and the day when the sun explodes.

What do you think about this report? Do you agree with the 90 percent negative coverage of Trump or do you think it’s more? SHARE your response below in the comment section and add this to your Facebook/Twitter timeline.