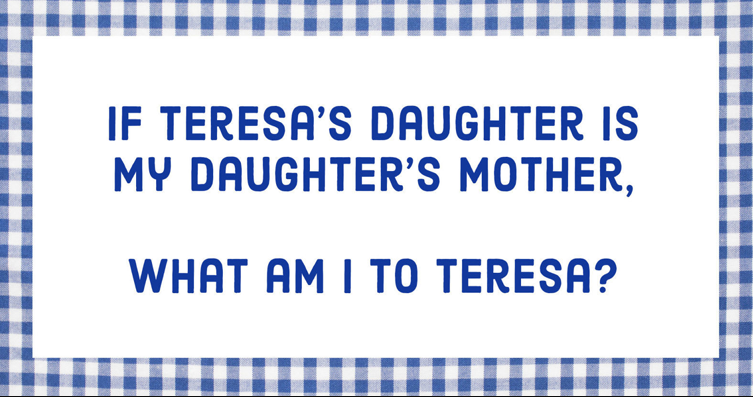 The internet is full of riddles that are extraordinarily challenging. But there’s one that people really can’t seem to solve: If Teresa’s daughter is my daughter’s mother, then what am I to Teresa?

What makes the riddle unusual is that it’s very short, which makes it even harder to solve. How could there possibly be enough information to answer it correctly? Can it be solved? As it turns out, there really is an answer! That’s because of the twisted language trick the riddle uses, which makes it seem much harder than it should be.

So, what’s the answer? Here it is: The person asking the question is really Teresa’s daughter. It’s easier to read if if it was worded this way: If Teresa’s daughter is me, what am I to Teresa?

Similar riddles which are almost as difficult find creative ways to distract you from the obvious answer. Here is another great example:

The answer is the word ‘incorrectly.’ Quotation marks would have made the question much easier to solve, but what would be the fun in that!

Sometimes these puns read like trick questions, but they really just take critical thinking. For example, here’s another:

The answer is: The code is “different.” The clerk was fearful about his own safety and telling the robber the information he demanded.

And here’s another classic example of wordplay in puns:

The hilarious answer is just one… the LAST brick. That’s what is needed to finish the job! This is too funny…

And speaking of last ones, here is the final wordplay example for puns. And it’s a head-scratcher!:

The answer is there are four ducks. Did you solve it correctly, or did the question drive you quackers?