Further diminishing their nearly non-existent editorial standards, the New York Times thought it’d be a great idea to hire Sarah Jeong, a former writer for “Verge” with a history of racist comments.

“Oh man it’s kind of sick how much joy I get out of being cruel to old white men” she tweeted on July 24th, 2014. “#CancelWhitePeople,” she wrote in November. Closing out the year in December, she asked: “Are white people genetically predisposed to burn faster in the sun, thus logically being only fit to live underground like groveling goblins?” “White men are bulls**t,” she wrote in another tweet.

You can read those, among many other tweets, below. Note that the “archive” link you see on each tweet is a backup of her Twitter because Sarah deleted these tweets (maybe she’s not as dumb as she looks?). 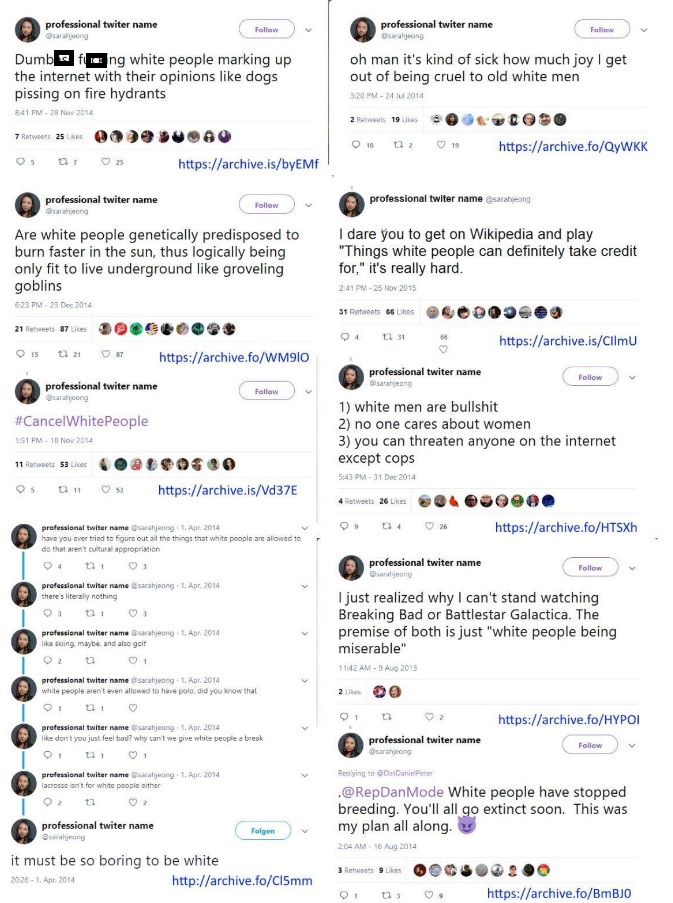 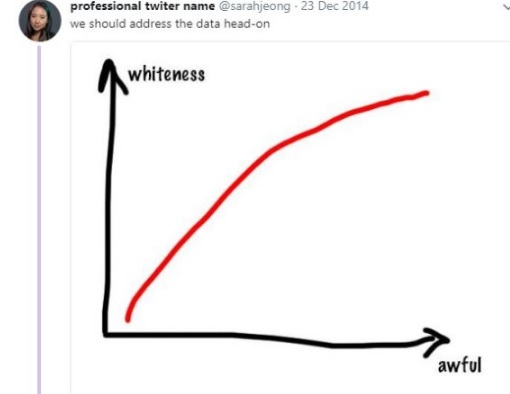 Jeong deleted these tweets, which certainly implies that there’s no reasonable explanation for them (such as if they were an insane joke, or if there was some other context). And what possible explanation could there be for a masochistic comment about enjoying mistreating old white people?

This story has gotten ZERO mainstream media attention, but the internet has already taken notice. In a world where everyone and their mother is getting fired for their Twitter feed, how does Sarah get promoted to the Times’ editorial board?

@nytimes can you explain to me how this is different than Roseanne?

Congratulations to @sarahjeong, new director for Guardians of the Galaxy Vol. 3

And the Times has fired people over their tweets before…. just earlier this year. Back in February the Times hired Quinn Norton, which was immediately followed by people unearthing old inappropriate tweets of hers in which she called people “faggots” on numerous occasions, retweeted a post that included the n-word, and appeared to have a relationship with another Twitter user that was a neo-Nazi.

And in response to learning that they probably hired a racist, the Times immediately fired Norton as quickly as they fired her.

What will the Times do now? Will they enforce an anti-racism policy against all their racist employees, or just the white ones? Because if it’s the latter, that sounds pretty racist to me.