Again. For the umpteenth time, a liberal reporter has posted blatantly fake news on Twitter, only to be corrected, but not before the original fictitious tweet spread halfway across the internet first.

Yesterday, Robert Mueller’s special counsel investigation team announced the arrest of Mariia Butina, a Russian spy who had connections to a few U.S. political groups, including the NRA. While there was no tie from Butina to the Trump campaign, some took this as a sign that Mueller was closing in on just how deep Russian espionage in America goes.

That didn’t stop speculation that the bust was somehow connected to Trump, however, especially after the controversial joint press conference that Trump hosted with Russian President Vladimir Putin. (RELATED: Trump Asked About Russian Election Interference – Replies ‘Where Is the Server?’)

Emily Singer, a reporter for MIC, a millennial news outlet (kill me now), posted a picture from last year of Trump meeting the Russian Foreign Minister Sergey V. Lavrov in the Oval Office. She also pointed out that a red-haired woman in the background could have been none other than Butina. Here is the picture she pointed out:

She then speculates that the woman in the background was actually Butina: 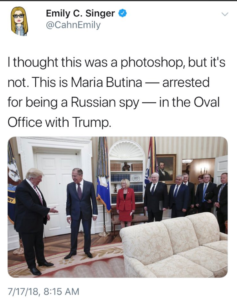 She then admits her mistake, and deletes her actual tweet: 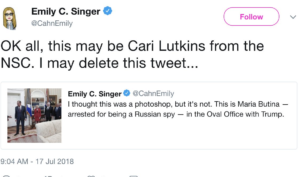 You’re not going to believe this but I found a photo of that same red haired Russian Spy meeting with Lavrov & Kerry. pic.twitter.com/cRkWurLZZe

it’s not even her pic.twitter.com/bhL2uINiIN

I thought this was a photoshop, but it’s not. This is Natasha Romanoff — a Russian spy arrested for leaking SHIELD secrets — testifying before congress. pic.twitter.com/gdtxV0mIkK

I originally thought this might have been a photoshop, but here’s a photo of a literal Russian spy hiding behind props while making fun of America. She even appears to be wearing a Soviet CCCP shirt (I don’t speak Russian, so don’t quote me on that). pic.twitter.com/5MwfGRyx79

I thought this was a photoshop, but it’s not. This is Ivan Drago — the guy who beat Apollo Creed to death — in the Oval Office with Trump. pic.twitter.com/XhuNUuE1fO

I’ve said it before and I’ll say it again: these people are sick. This crap needs to end. Reporters on Twitter need to stop openly speculating on things, because their message ends up going viral, and spreads around the platform like a contagion, infecting everyone who comes in contact with it.

It’s reckless behavior; in fact, it’s a fireable offense. Singer ruins not just her credibility but the credibility of her outlet and employer.