Suppose for a second that it’s completely impossible for illegal aliens to vote and that no illegal has ever cast a ballot. That’s obviously not the case, but for the purpose, this thought experiment, pretend it is.

Would it then be fair to say that it’s impossible for illegals to influence elections?

While the debate over illegal voting tends to center around the frequency of its occurrence, it doesn’t have to occur at all for illegals to influence elections, because of a variable seldom discussed: each State’s electoral votes. It’s no secret that illegal aliens are disproportionately concentrated in the Blue States, and the greater a State’s population, the more electoral votes they receive. In other words, even if illegals themselves can’t vote, they increase the value of each legal citizen’s vote (who would likely vote in the same direction as these illegals).

According to the Daily Caller, “The state of California would lose four seats in the U.S. House of Representatives, and therefore four votes in the Electoral College if only citizens were counted in the decennial national census. The report comes days after a lawsuit that argues against including a citizenship question in the national census received the green light to go to trial Thursday (today).”

If States distinguished between citizens and noncitizens when distributing representation in the form of how many electoral college votes each State gets, States like Louisiana and Montana would benefit the most, while California and New York would be hurt the most. In total, eleven States would have a different number of electoral votes if only legal citizens were counted. “California would lose four, and Texas, New York, and Florida would each lose one. Montana, Missouri, Minnesota, Michigan, Pennsylvania, Louisiana and Colorado would each gain one,” says the Daily Caller.

In total, that means Blue States (California, New York), would lose five electoral votes, while Red States (Montana, Missouri) would gain two. The other States listed are too competitive to classify them as leaning entirely in one direction, though in recent elections, they have mostly voted Republican.

Regardless of how this will affect either political party, why are illegal aliens being counted in representation in the first place? Who was under the impression that our politicians are supposed to represent the interests of illegals?

Ironically, while it’s Democrats who’d like to maintain this current system of representation while we have an electoral college, they’re also the ones calling for the abolition of the Electoral College in the wake of Trump’s presidential victory. That would be a disaster for a number of reasons, including the fact that: 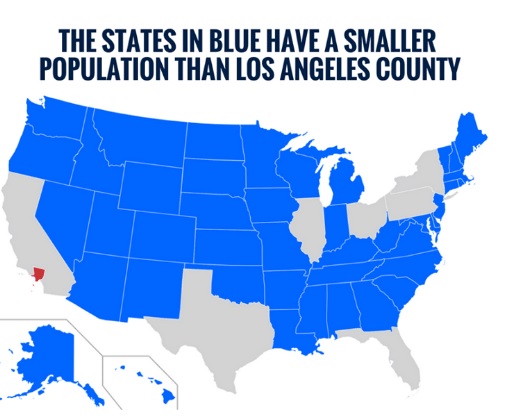 We all know that Democrats have long forgotten about middle America, but their votes deserve consideration too.