Would it kill the media to get their facts straight when it comes to “families separated at the border”?

For all the child detention facilities we’ve seen on MSNBC, is there ever any context on how the children wound up there? While we’re to assume that Trump’s “regime” ripped them from their crying mother’s arms before marching them to camps, the reality is much less cartoonish. In fact, the majority, 10,000 of the 12,000 kids in custody of Health and Human Services today were sent across the border unaccompanied by their parents. It’s hard to be ripped from a parent’s arms when they weren’t present in the first place.

And child separations at the border are hardly a Trump-era policy, even though the liberal media likes to pretend they are.

In fact, under Obama, the problem was much larger.

The only difference is the media’s coverage. (RELATED: Trump’s ‘Zero Tolerance’ Immigration Policy Isn’t New – Obama Did the Same Thing). 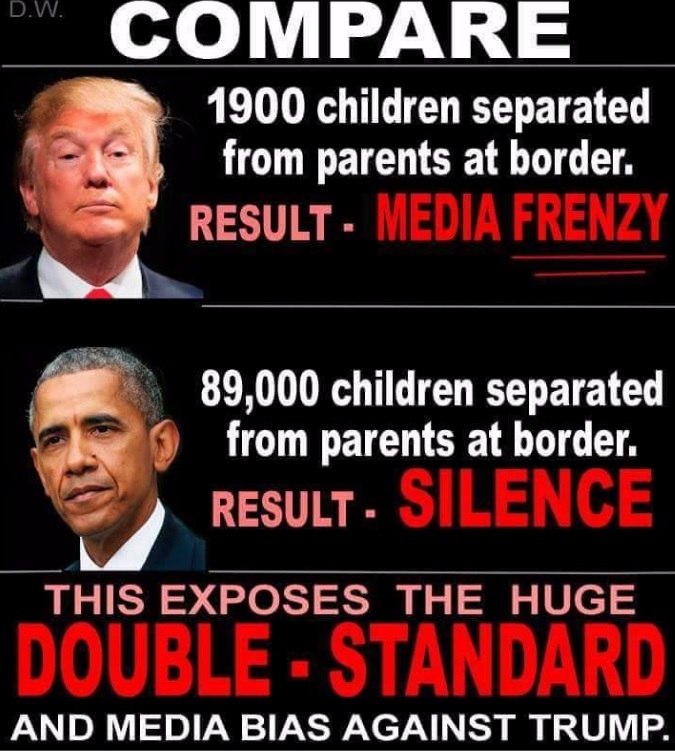 Speaking of child separations, when’s the last time you heard a pundit inform you that the problem was worse under Obama? The HHS said that there were as many as 10,852 children in their custody at the end of May. Meanwhile, in 2013, Obama’s HHS’s Office of Refugee Resettlement (ORR) had 25,000 unaccompanied minors in their care. In other words, at its peak, the problem was more than twice as bad under Obama than it is currently under Trump

And what about the detention of migrant children overall?

Between 2010-2016, the Obama administration prosecuted 500,000 illegals. Figures from the ORR prove that between 2012-2016, almost 200,000 migrant children were referred to the DHS (because they were either separated from their families, or they were unaccompanied minors). I can only criticize the meme pictured above in that it understated the scope of the problem under Obama.

Where was the liberal compassion when the same problem that exists under the Trump administration existed under Obama’s? If they were anything like Hillary Clinton at the time, they were too busy arguing for deportation.

Even I’ll admit, I’m impressed by the Left’s ability to turn the issue of illegal immigration from a bipartisan issue to a “right-wing extremist” one. Unfortunately for them, it will not bode well for them in the midterms.