New Women’s March Board Member: US Military And ISIS Terrorists Are ‘Comparably Evil’

A new board member for the left-wing activist group Women’s March has repeatedly compared the U.S. and Israeli militaries to the terrorist groups ISIS and Al Qaeda.

The executive director of the Council on American-Islamic Relations (CAIR), Zahra Billoo, is one of 16 new additions to the Women’s March board. The embattled activist group simultaneously cut ties with three board members who have been accused of anti-Semitism.

She justified boycotting “Wonder Woman” in 2017 because lead actress Gail Gadot served in the Israeli Defense Forces (IDF), writing on Facebook and Twitter: “I similarly would not watch a movie where the lead actor or actress were proud of their participation in the US military, ISIS, or Al Qaeda.”

“Don’t guess, I’ll just tell you, I believe all of them are comparably evil,” she added. 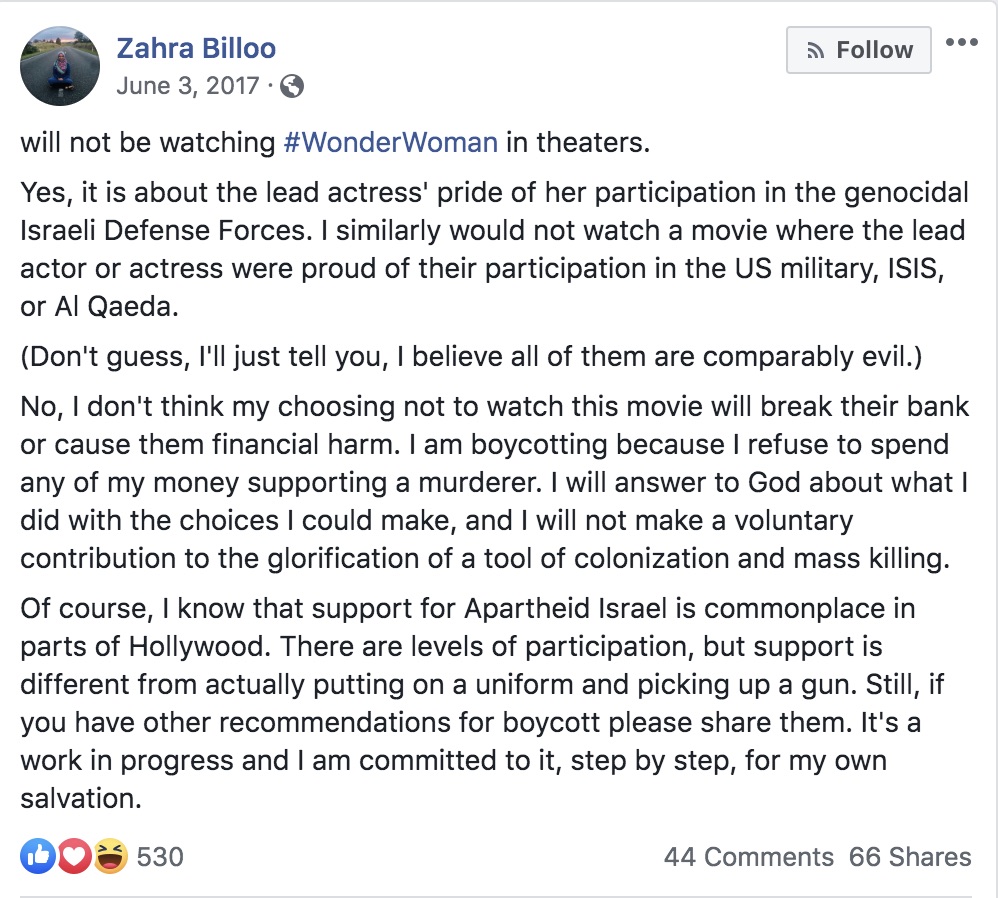 “He explained the promise of the educational benefits lured him in. He was otherwise not going to be able to go to school. I shared that financial benefits are often a recruiting tactic for groups like ISIS also. That was tricky for me. Gently comparing his experience to that of ISIS fighters,” she wrote on her public Facebook page.

“I refrained from comparing him to a Nazi cook, who though a cook, was still part of the Nazi operation. It took a lot to not say it,” she added.

In a May 2018 post Billoo wrote that she “doesn’t see any difference between American youth leaving the country to join ISIS or the IDF. Both are murderous, war crime committing, terrorist entities.”

“This American Muslim works to be on the front lines of redefining terrorism,” she wrote in a 2016 tweet. “It’s ISIS but it’s also the US military.”

She similarly wrote in a 2014 tweet that she “opposed all terrorism, including all that regularly committed by the US military and Al Qaeda, the Israeli Defense Forces and ISIS.”

Women’s March didn’t return an email seeking comment on Billoo’s comparisons of the U.S. and Israeli militaries to terrorist groups.

Alyssa Milano Has Nice Things to Say About Ted Cruz After Meeting: He ‘Isn’t a Villain’

Does anyone really care what this dingaling thinks? Huh?

Get rid of all Hadji’s especially all sperm receptacle types. They are not used to having their voices heard.

Why does anyone care what these miserable hags have to say?

So you say I am evil, and you don’t even know me. Well Ms. Billoo you certainly sound like an evil person.

muslims by definition are entirely DISHONEST !

Hey scarf headed woman, you were right about ISIS, BUT TOTALLY WRONG ABOUT U.S. TROOPS!!!

Islam the religion of peace…yeah right.
Islam made up from Hebrew/Jews traditions,
founded by a sick elderly pedophile called mohammed
a fake god called allah.
The only good follower of islam is a…………..one….

If these people hate America so much, please I will gladly help get you out of the USA and on an leaky cargo ship and send you to the muslim country closest to the usa…or….

Go live in the Middle East with your Muslim buddies. You are not wanted here.

This is what a satanic worshipper looks like. No wonder Muslim men love goats.

Then Get The Hell Out Of America Please…

Billoo Baggins, “And just what do you think you are going? ”

“This religion is Mine! My precious”, Billoo replied.

“Don’t you know that it must be destroyed in the Lake of Fire at Mount Doom on judgment day?”

Why are American Muslim women leading marches on OUR CAPITOL. The “Religion” itself produces about 90% of the HATE AROUND THE WORLD. Wherever there is terror there are Muslim Involvement. I know now I am Racist. LOL LOL FU, you all know it’s true. BTW that’s an estimate

I am now making more than $20k per month just by doing an easy w0rk 0nline from home. Last month i have made $22749 from this easiest 0nline home based w0rk just by doing this in my spare time for only 2 to 3 hrs a day using my laptop. This home j0b is just awesome and regular earning from this are just amazing. Everybody can now get this j0b and start earning 0nline just by follow instructions on this website…………jobs950.com