The Difference Between Ben Carson and Maxine Waters Perfectly Explained

The difference between two prominent African-American political leaders in the Republican and Democrat parties couldn’t be more stunning. Just listening to Republican Ben Carson and Democrat Maxine Waters for a few minutes exposes the deep divide between traditional American values and unhinged leftism. The chasm in intelligence between the pair is likewise vast.

Yet, while Secretary of Housing and Urban Development, Doctor Ben Carson, largely ignores Mad Maxine, Waters has been mounting relentless attacks against him for the sole transgression of working in the Trump administration.

In June, Waters sneered that Carson should go back to being a surgeon, and threatened that if he goes before the House Committee on Financial Services again, where she serves as ranking Democrat, that she’ll “take him apart.”

Waters followed that up a week later saying she’d like to “take his ass apart.”

Some people were quick to suggest that Carson should be able to handle his own in a battle of wits with Ms. Waters.

Classy, brainy, tough, and kind Dr. Ben Carson should have no trouble with Mean Maxine. Maxine has become deluded.

All well and good, but would Waters supporters understand just what their California congresswoman would be up against?

Doubtful. So we’ve put the difference between Dr. Carson and Maxine in the simplest terms possible, something they could more readily process … 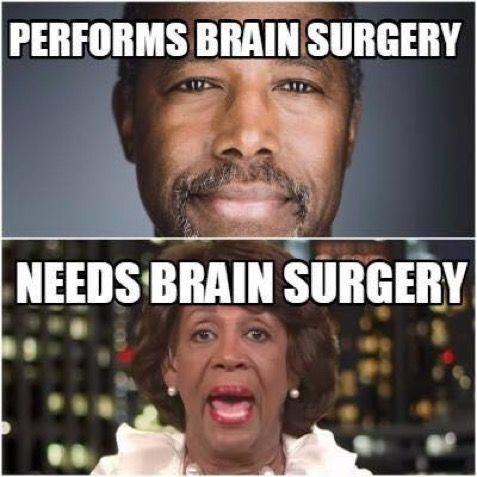 And boom goes the dynamite!

This is a woman whose only platform is to repeatedly screech the words “Impeach 45” ad nauseam so that her uninformed followers can feel good about their ‘resistance.’

An individual so restricted by tunnel vision that she screams about impeaching the President even at a person’s funeral!

Yea, so when it comes to a battle of the minds, we’re not all that concerned for Ben Carson.

We are however, a little bit concerned about Waters’ constituents, who don’t seem smart enough to understand that they keep re-electing one of the most corrupt politicians in Congress.

Don’t take our word for it.

Waters was named “one of the most corrupt members of Congress” by the Citizens for Responsibility and Ethics in Washington. Ethical concerns first arose from a case that involved steering $12 million in bailout funds to a bank where her husband sat on the board.

She owns a 6,000 square-foot mansion worth $4.3 million on the salary of a congressional representative!

How a congresswoman once dubbed the “most corrupt” is now a star of the resistance https://t.co/mH7qiBUHFb

How can she afford such things? Do her supporters not even bother to question?

Oh well, at least we don’t have to worry about the Democrat Party elevating her to a prominent role within their ranks.

Except Democrat strategist Robert Patillo wants to see Waters as Speaker of the House in 2018.

“Democrats looking at a president hovering around a 30 percent approval rating have no reason to run into a burning building and try to put it out,” Patillo said, “when they should instead just wait for 2018 when they have Speaker of the House Maxine Waters and Senate leader Chuck Schumer.”

Now that is a scary thought. Perhaps it’s the voters in her district and the leaders in her party that need the brain surgery.

What do you think? Who would win in a battle of the minds – Ben Carson or Maxine Waters? Tell us what you think below!