Mass Public Shootings Are Extremely Rare And Other Gun Facts

It’s no secret liberals manipulate statistics to get their way on gun control. The above meme makes that point well enough.

But, really, how common are mass public shootings like the kind that happened in Las Vegas? If you look at left-wing outlets, it’s not uncommon to see estimates of literally thousands of mass public shootings taking place in America every year. “Already this year there have been more mass shootings than days in the year,” Connecticut senator Chris Murphy said on October 8th, the 275th day of the year.

How the heck did he arrive at such a number, anyway? By using a mass public shooting definition that’s so loose you’ll have to sort through a huge list before you even come across the words “Pulse nightclub massacre” or “Columbine.” The “Mass Shooting Tracker,” which Murphy cited as proof of his claim, defines a mass public shooting as an incident where four are more people are shot (but not necessarily killed) in a single shooting spree. In such cases, it’s more likely that a mass shooting is actually just feuding gangs having a shootout than a man walking into a public area and opening fire.

The Mass Shooting Tracker’s definition of a mass shooting is much more liberal than what the FBI uses. That’s why liberals often use it to sensationalize gun violence. The FBI’s definition is a tad more strict: Four or more homicides (excluding the shooter) occurring during the same incident. Using that criteria, Mother Jones (a far-left site that was tired of seeing their fellow leftists spreading misinformation on mass shootings) created a database of all mass shootings in America since 1982.

They found that mass shootings are extremely rare, averaging just over 2 per year for the last 36 years. That number has been increasing, however, with an average of 3.7 mass shootings accounting for 38 deaths per year over the last 10 years.

But for comparison purposes, between 1999 and 2015 (the years for which the CDC website tracks mortality rates and causes), more people were killed by: 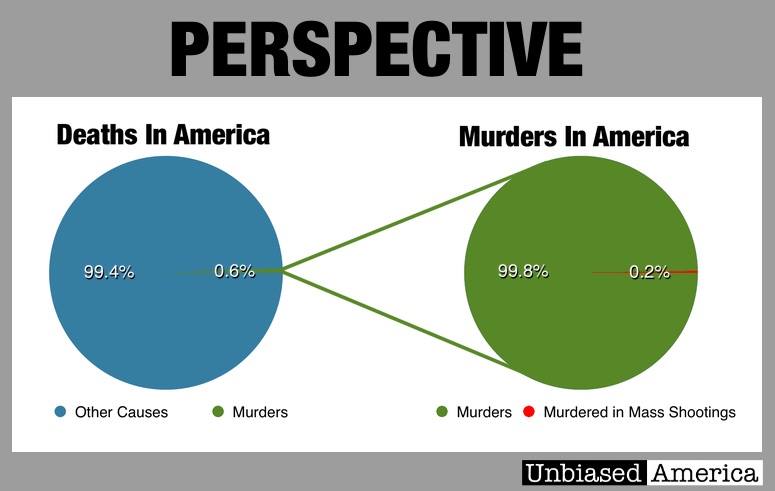 Share this story with others to show them the truth about mass shootings in America!