There were plenty of interesting factoids to come out of the recent JFK files release: The CIA considered mob hits on Fidel Castro, someone called the FBI threatening to kill Lee Harvey Oswald a day before Oswald’s murder, and the U.S. examined sabotaging airplane parts heading to Cuba.

There was even proof that the CIA used journalists and media figures to spread propaganda.

Additionally, we got confirmation that President Kennedy’s successor following his assassination, Lyndon B. Johnson, was possibly a member of the KKK.

One of the newly released files contains a memo about a journalist named Ned Touchstone, who was an editor of The Councilor, the newsletter of the racist White Citizens’ Councils.

Touchstone claimed the Ku Klux Klan had “documented proof” that LBJ had been a member of the Klan in the early days of his political career in Texas. 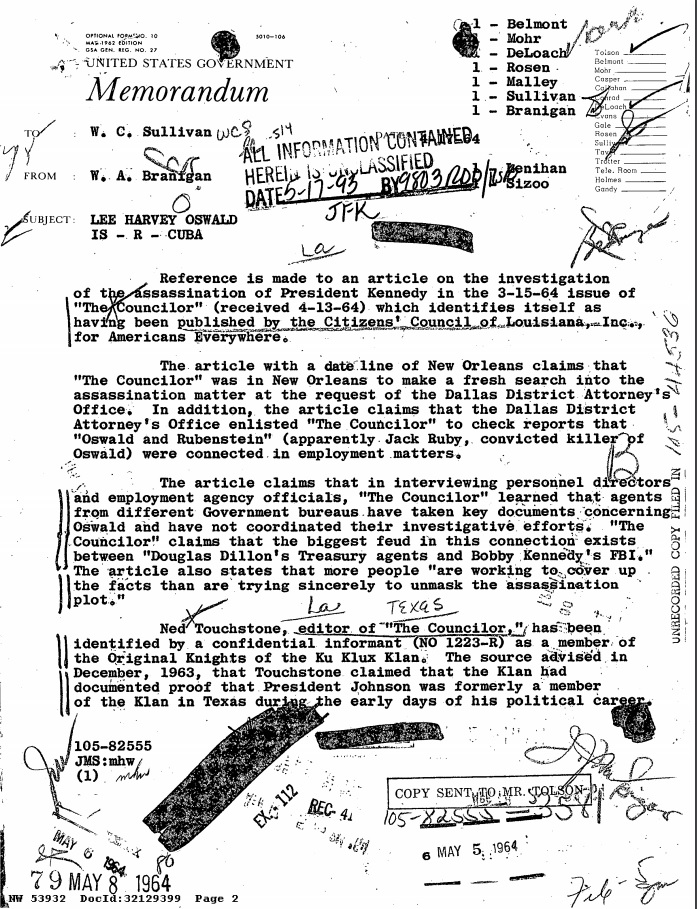 President LBJ was in the KKK, just putting that out there. Not Donald Trump, but democratic hero Lyndon B Johnson = KKK

LBJ was very typical of Dems & KKK'rs then AND now. Racist to the core. Pathetic isn't it? pic.twitter.com/2UYF2Slfqz

KKK was started by Democrats. Just released in the JFK files, LBJ was one himself! And Hillary's mentor Sen. Byrd too.

That Johnson would have been a member of the Klan wouldn’t be much of a surprise, frankly. As a member of the Senate, he fought vigorously against civil rights legislation favored by President Eisenhower and Republicans. Early in his political career, Johnson was guilty of all kinds of statements in support of Jim Crow laws in the South.

This isn’t verified proof that Johnson was indeed part of the Klan. But given the political circumstances from which he rose (deep South, Democrat-dominated Texas), it’s not that far-fetched. In fact, more likely than not, Johnson mixed around with a racist crowd to get his political start.

Share this story with others to let them know that LBJ was possibly part of the KKK!

President Trump Responds to Manafort Charges: What About Hillary Clinton?