Unless you’ve been living under a rock, you may have noticed Kanye West lighting up the internet with his tweets about emerging from the “sunken place.”

He’s been posting support of the conservative, free-thinking Communications Director for Talking Points USA, Candace Owens, as well as photos of himself wearing a ‘Make America Great Again’ hat.

He even took a shot at former President Barack Obama.

“Obama was in office for eight years and nothing in Chicago changed,” he wrote.

Whoa, fella … Pump the breaks. You’re an entertainment icon who hobnobs in Hollywood. You can’t criticize the nation’s first black President! Liberal elites aren’t going to have any of that.

Obama was in office for eight years and nothing in Chicago changed.

Now, whether or not Kanye is having a conservative awakening or not, or if he’s just trying to promote upcoming projects, remains to be seen. But the man is allowed to speak his own mind … at least in the eyes of most Americans.

Liberals, however, would like him to shut up and get back on message.

Nowhere is this illustrated any better than with the following political cartoon by A.F. Branco. 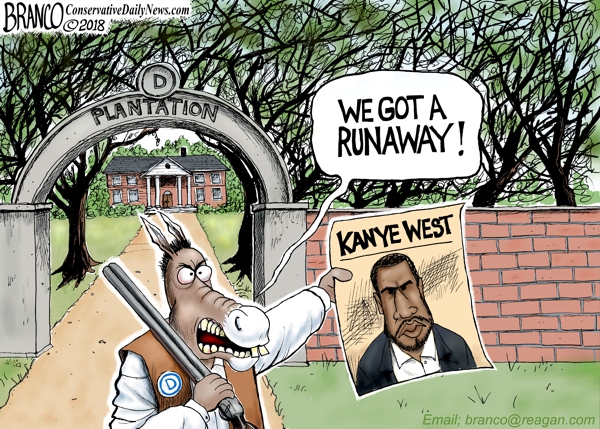 “Liberals are in a psychotic frenzy over Kanye West thinking independently toward Trump, rather than the lockstep groupthink they expect out of black Americans,” Branco writes at his website, Comically Incorrect. “Indeed, The Left strokes out when any high-profile black leaves the Dem plantation.”

Need proof that they’re going off the rails over Kanye’s ‘woke’ status? We present the following …

I will never buy another @kanyewest album ever again. I think this publicity stunt of his support for Trump is downright despicable. Kanye can go to hell.

Alleged comedian Stephen Colbert accused West of prostituting himself for a job and even called him “Kellyanne Kanye.”

“I think Kanye’s lobbying for a job as Trump’s new communication’s director,” he joked. “He could just change his name to Kellyanne Kanye.”

How dare Kanye promote free and independent thought in a land of liberal cultists!

Why isn’t anybody in Hollywood or entertainment joining Kanye and talking about the reality of Obama’s detrimental policies to a city like Chicago, or the historically low unemployment numbers in the black community under President Trump?

Kanye West has performed a great service to the Black Community – Big things are happening and eyes are being opened for the first time in Decades – Legacy Stuff! Thank you also to Chance and Dr. Darrell Scott, they really get it (lowest Black & Hispanic unemployment in history).

During the 2016 campaign, Trump encouraged the black community to give his policies a shot.

“You’re living in poverty, your schools are no good, you have no jobs, 58% of your youth is unemployed — what the hell do you have to lose?” he asked.

Now it appears, Kanye is giving ‘MAGA’ a chance.

Is Kanye sincere when he talks up President Trump? Are liberals trying to force him back to the Democrat plantation? Will it ever end? Tell us your thoughts below!

Stephen Colbert with his RAT EAR should be careful with Kanye!
Kanye has a lot more in him than I could ever imagine!

Way to be a Real American!
That Rat, Colbert, is a chicken SSSS MF!
You are not funny!
I hope Kanye puts one of his Expensive Shoes up your skinny Rear Compartment!

I still say he’s a no talent hack.

Many of the Brothers I play Basketball with on weekends have gotten hep to the DEMI BULL Crap!
They don’t even romance the Brothers for their vote!

We want immigrants who can contribute and not commit crimes!