Jimmy Carter: Jesus Would Not Approve of Abortion

Comments that President Jimmy Carter made about Jesus and same-sex marriage are making headlines, but it’s his comments about abortion that may surprise people more. “I think Jesus would encourage any love affair if it was honest and sincere and was not damaging to anyone else and I don’t see that gay marriage damages anyone else,” Carter, a born-again Christian, said in an interview with HuffPost Live. “I never have run across any really serious conflicts between my political obligations and my religious faith,” he said.

While this HuffPost interview is getting attention now, it’s actually from 2015, when the now 93-year-old was on to promote his then-new book, “A Full Life: Reflections at Ninety.” The newfound attention it’s getting could be because Carter’s comments are relevant to multiple issues going on with the Supreme Court today.

In a comment applicable to their recent ruling that a baker could refuse to serve a gay wedding, Carter did clarify in that interview that he doesn’t believe churches that disagree with same-sex marriage should be forced to officiate such weddings.

And after that, he turned to the issue of abortion, stating that he believes Jesus would have disapproved of most abortions. “I have a hard time believing that Jesus would approve abortions unless it was because of rape or incest or if the mother’s life was in danger. So I’ve had that struggle,” Carter said. “I’ve had that struggle, but my oath of office was to obey the Constitution and the laws of this country as interpreted as the Supreme Court, so I went along with that.” The Roe V. Wade case was ruled on during Carter’s presidency, and many liberals fear that Trump’s forthcoming SCOTUS nominee would lean towards overturning Roe if the opportunity ever presented itself. (RELATED: Here Are President Trump’s Top Two SCOTUS Picks).

While Carter is remembered as undoubtedly one of the weakest Presidents in recent American history, conservatives have found an ally in him on the pro-life issue. While the Left today has adopted abortion to a disturbing degree as part of their Party platform, Carter urged them to take the opposite approach. In 2012, he said that he “signed a public letter calling for the Democratic Party at the next convention to espouse my position on abortion which is to minimize the need, requirement for abortion and limit it only to women whose life are in danger or who are pregnant as a result of rape or incest,” and noted that many people were estranged from the Democratic Party because of the abortion issue.

He’s certainly right about that. While the Left today loves to portray the abortion issue as a “war on women,” when you look at the polls, particularly when it comes to increasing restrictions on abortions but not banning them outright, the issue is really a “war between women.” Overall, there are about as many pro-life people as pro-choice people today. Just two decades ago, there was nearly a 20-percentage point gap in favor of the pro-choice position. 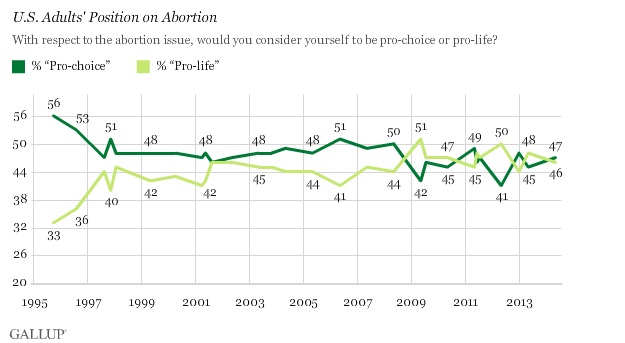 Also notable is that the same poll found that 28 percent of Democrats are pro-life, and Independents are about split on the issue, with 46% identifying as pro-choice, and 45% as pro-life. Not like I want to help Democrats get elected, but they really ought to tone down the abortion rhetoric if they know what’s good for them.

If there’s one thing that’s becoming increasingly clear, it’s that not only does Jesus not approve of abortion, most Americans are increasingly leaning in the same direction. While liberals like to pretend that there are generational shifts on issues like gun control or illegal immigration, there is one with abortion, and they’re ignoring it completely.