After another rough year, 150 ESPN employers learned that they’ll be beginning the new year unemployed. According to The Daily Wire, the announcement came earlier today from ESPN President John Skipper in a memo sent to employees. “Today we are informing approximately 150 people at ESPN that their jobs are being eliminated. We appreciate their contributions, and will assist them as much as possible in this difficult moment with severance, a 2017 bonus, the continuation of health benefits and outplacement services. They will also appreciate your support.”

Most of the jobs eliminated were in the departments of studio production, digital content, and technology. ESPN said that they “will continue to invest in ways which will best position us to serve the modern sports fan and support the success of our business.”

This came after other notable recent layoffs, when ESPN cut 300 jobs in October of 2015, and another 100 in April of 2017. Prior to the most recent layoffs, the company employed roughly 4,000 people domestically.

As we’ve documented previously, these layoffs were in the works for a while, as ESPN’s ratings have continued a constant trajectory…. downward. In fact, ESPN has lost around 13 million subscribers since 2011, when a record 100.13 million households subscribed to cable packages that included the network. That number fell to 87.22 million in August. 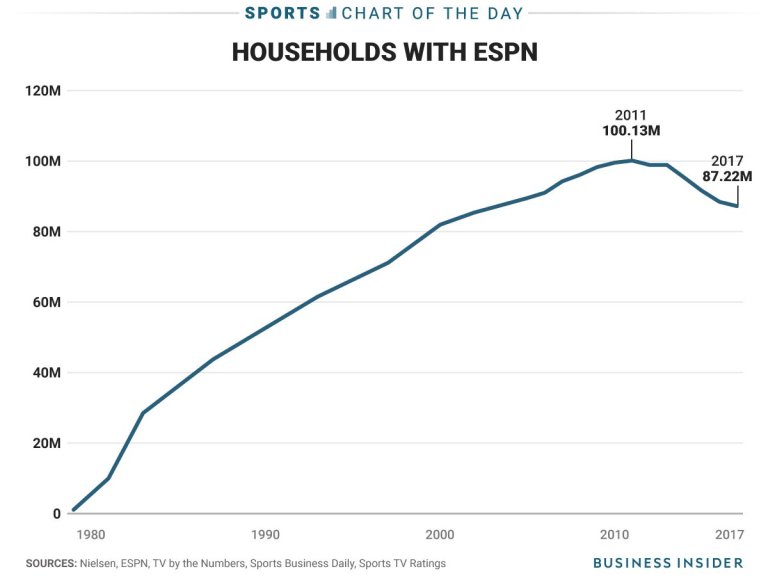 Both ESPN and the NFL have been on the same downward trajectory in ratings, and for similar reasons. The NFL allowing the “take the knee” protests was wildly unpopular with viewers – and ESPN has been injecting left-wing commentary into their sports coverage for even longer.

Is it really a surprise that nobody wants to hear politics on a sports network? Insiders at the network have even admitted as much – that they’ve shot themselves in the foot.

The network’s public editor, Jim Brady, admitted back in November of last year: “One notion that virtually everyone I spoke to at ESPN dismisses is what some have perceived as unequal treatment of conservatives who make controversial statements vs. liberals who do the same.”

He continued, stating, “the company’s perceived move leftward has had a stifling effect on discourse inside the company and has affected its public-facing product. Consumers have sensed that same leftward movement, alienating some…. For most of its history, ESPN was viewed relatively apolitically. Its core focus was — and remains today, of course — sports.”

A year later, people still have yet to perceive that “core focus” as sports.