Things haven’t been pretty over at ESPN.

The rise of NFL players protesting by “taking the knee” during the National Anthem has decreased viewership of Monday Night Football, thus damaging ESPN. But the network has only compounded the problem by pushing left-wing politics on air. The network’s public editor, Jim Brady, admitted as much in November of last year: “One notion that virtually everyone I spoke to at ESPN dismisses is what some have perceived as unequal treatment of conservatives who make controversial statements vs. liberals who do the same.”

He continued, stating, “the company’s perceived move leftward has had a stifling effect on discourse inside the company and has affected its public-facing product. Consumers have sensed that same leftward movement, alienating some…. For most of its history, ESPN was viewed relatively apolitically. Its core focus was — and remains today, of course — sports.”

Last Friday, it was reported that the network may lay off between 40-60 employees in late November or early December (what a great early Christmas gift, eh?). The network’s largest round of layoffs came in October of 2015, in which 300 employees were terminated. After that, the network laid off 100 more in April.

ESPN has roughly 4,000 employees total in the U.S., and 8,000 worldwide. There aren’t similar stories of layoffs coming out of the other countries where ESPN has operations, indicating that their problem is unique to their American market.

According to the Orlando Sentinel, the network’s signature show “SportsCenter” will be the most impacted: “ESPN has lost around 13 million subscribers since 2011, when a record 100.13 million households subscribed to cable packages that included the network. That number fell to 87.22 million in August, when Nielsen released its most recent subscriber estimates.”

Prior to 2011, the network saw uninterrupted growth. 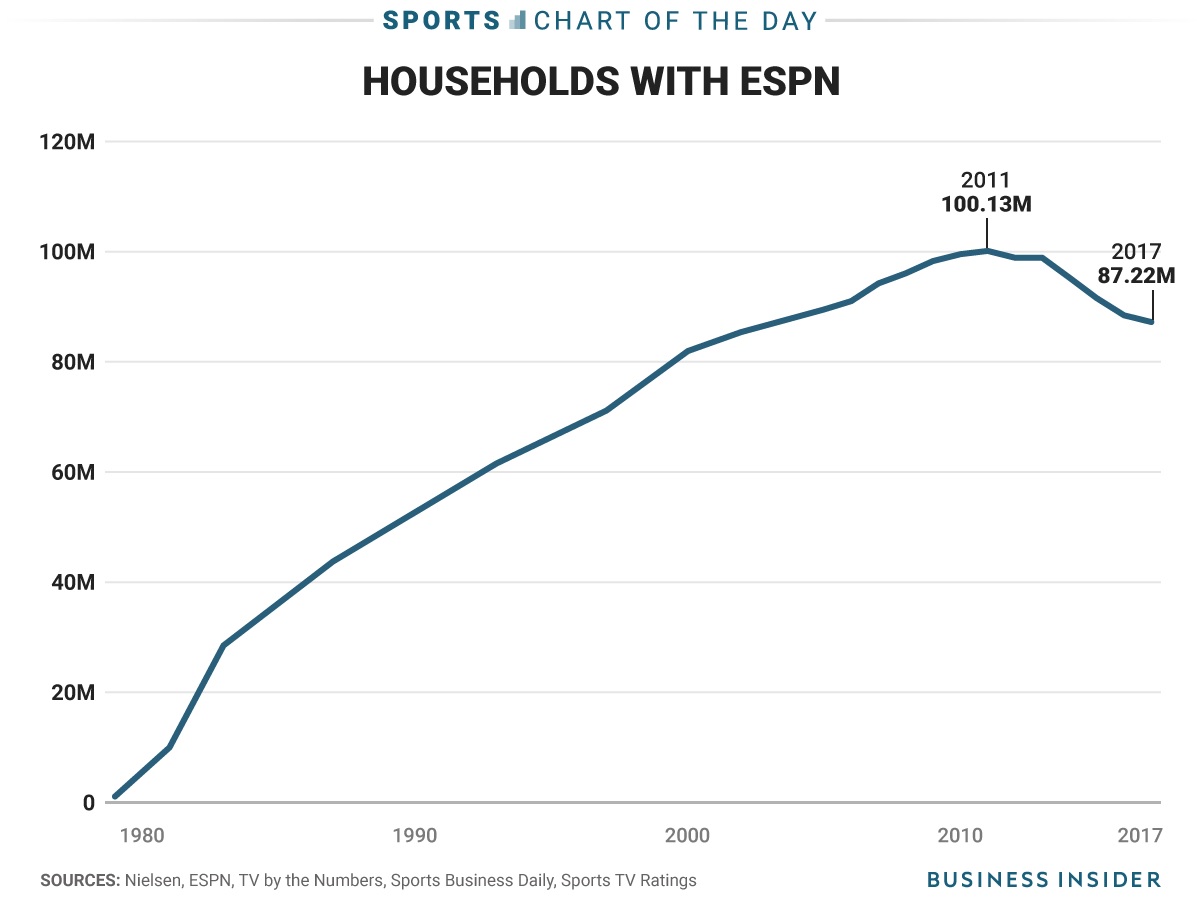 But it gets worse. With tanking NFL ratings related to ongoing National Anthem protests, one analyst is suggesting the network drop Monday Night Football to save money. The Hollywood Reporter’s James Andrew Miller says that ESPN is already exploring options to do just that.

From Breitbart: “Miller points out that ESPN may have already quietly set up the move to dump the NFL by removing from its affiliate agreements a former requirement that it retain NFL broadcast rights in order to keep its high subscriber fees intact.” The network’s contract to broadcast Monday Night Football ends in 2021.

This is all speculation at this point, but there are two walls closing in on ESPN: Its constant promotion of left-wing ideology and falling NFL ratings taken together means something has to give.

And more and more, it looks like conservatives are waking up to the fact that many ESPN personalities regard them as the moral equivalent of back-alley garbage.

The most recent political controversy to come out of ESPN was over anchor Jemele Hill, who was suspended from the network after referring to President Donald Trump as a “white supremacist.”

With Jemele Hill at the mike, it is no wonder ESPN ratings have "tanked," in fact, tanked so badly it is the talk of the industry!

Hill later said that she deserved her suspension – but stands by what she said.

What do you think? Will ESPN soon shed Monday Night Football? Is the network in big trouble? Tell us your thoughts below and share this story over Facebook now!

Hillary Says She’ll ‘Go As The President’ on Halloween