A clever take on an old proverb helps explain the mindset that divides Republicans who are pro-work and reward, and Democrats who like handing out free gifts.

In other words, teaching someone to help themselves is a far better virtue than giving them a handout.

Democrats, however, don’t simply want to provide handouts – they want to take them from others who worked hard to get their own stuff!

Here’s an updated take on that proverb … 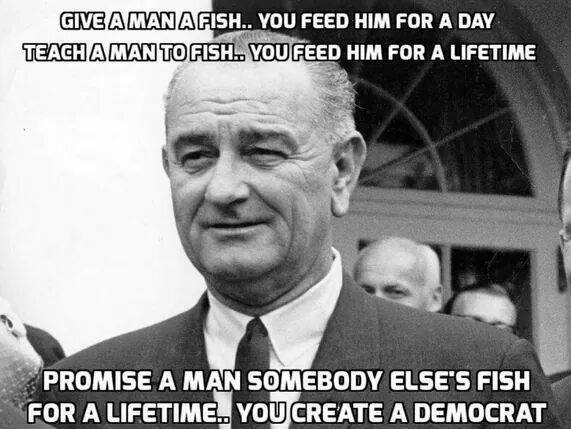 Democrats are perpetually guilty of this, not content to provide free items to the poor or downtrodden, making them dependent on government, they must use other people’s items to make it happen.

Former President Barack Obama once told a plumber, “When you spread the wealth around, it’s good for everybody.”

Margaret Thatcher famously proclaimed, “The problem with socialism is that you eventually run out of other people’s money.”

The Problem with Socialism is you eventually run out of others people’s money – Margaret Thatcher pic.twitter.com/1GbLd1SWoU

That’s the basis of the Democrat/Socialist party – they’re willing to go down that route to find out if they truly can run out of other people’s money.

Cruz asked Cantwell to name the difference between a Democrat and a Socialist. She couldn’t.

The other man in that pairing, Sanders himself, was unable to answer the riddle at last month’s tax debate.

Here’s a clip of that moment, slightly enhanced with Curb Your Enthusiasm theme music, which is hilarious.

Cruz: What is the difference between a socialist and a democrat on taxes?

Sanders: I don’t know the answer to that. pic.twitter.com/RTjOu2MXhR

There is no difference. Both want to hand out free fish, and both want to get that fish from the people who caught it!

What do you think is the difference between a Democrat and a socialist? Share your thoughts below!