Five Things You Need to Know About Trump’s SCOTUS Pick

President Donald Trump’s pick for the Supreme Court is in, and it’s already driving liberals insane (though in all fairness, it would’ve driven them nuts regardless of who he picked). Hours before the pick was announced, ABC’s Nightline tweeted about the “controversial Supreme Court Justice pick” that nobody yet knew of.

Of President Donald Trump’s four main picks, the list was first narrowed down to Judges Amy Coney Barrett and Brett Kavanaugh. In the end, though, Trump made his choice with Kavanaugh. (RELATED: WATCH: College Students Freak Out Over Fake Trump SCOTUS Pick).

So, who is this guy? Here are five things to know.

Also of note, departing Justice Kennedy is actually slightly center-Left according to their ideological scoring. 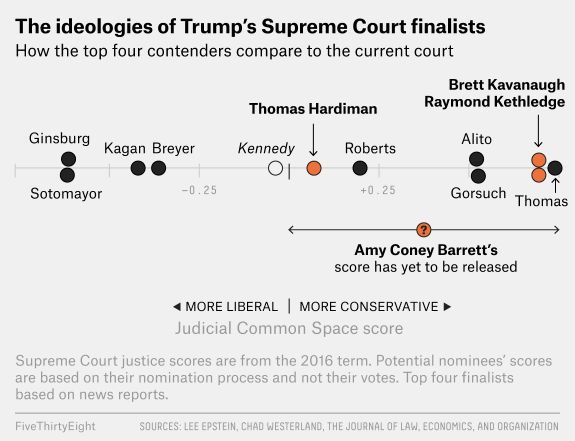 He Worked on the Clinton Impeachment Proceedings

Kavanaugh was the lead author of the Starr Report nearly 20 years ago, which made the case for former President Bill Clinton’s impeachment. His case was based upon Clinton’s “lying to his staff and misleading the public.” Kavanaugh also tried and failed to persuade the Supreme Court to force Vince Foster’s lawyer to turn over notes from a private conversation shortly before his death.

Afterward, Kanavaugh was a former aide to President George W. Bush, and served on the D.C. Circuit Court since 2006, having authored over 300 legal opinions.

Judge Amy Coney Barrett’s Catholic faith (and strong socially Catholic beliefs) came under fire in the media, but Kavanaugh is also Catholic, and the media never seemed to touch the subject in his case. A practicing Catholic, Kavanaugh serves meals with Catholic Charities in Washington and has tutored at Washington Jesuit Academy, where he sits on the board of directors.

While Kavanaugh was formerly a clerk for the (relatively moderate) Justice Anthony Kennedy, “Kavanaugh is much loved in conservative legal circles as an originalist in the mold of Justice Clarence Thomas and former Justice Antonin Scalia,” according to Politico. Trump’s prior SCOTUS pick, Neil Gorsuch, also clerked for Kennedy.

He Would (Probably) Vote to Overturn Roe V. Wade

While it is extremely unlikely that a case attempting to appeal Roe V. Wade would be appealed up to the SCOTUS, if such an event were to happen, it’s likely that Kavanaugh would lean towards repeal. Last fall, Kavanaugh wrote a decision siding with Trump administration lawyers to block a migrant teenager in Texas from being released from custody to receive an abortion. The full appeals court overturned his ruling, and Kavanaugh responded by criticizing his colleagues for creating a “new right for unlawful immigrant minors in U.S. government detention to obtain abortion on demand.”

If you liked Trump’s pick with Neil Gorsuch, there’s going to be even more to like with Kavanaugh.

Hopefully, Senate Republicans will remain united and confirm Kavanaugh in a speedy fashion and will not cave to liberal pressure.