Alexandria Ocasio-Cortez (AOC) and other Democrats lashed out at Representative Paul Gosar over a bizarre parody video showing the Arizona Republican striking her and running, swords in hand, toward President Biden.

Gosar tweeted out the 90-second video with the caption, “Any anime fans out there?”

The congressman, starring in the parody clip which mimics the Japanese anime series Attack on Titan, takes part in a battle to defend against illegal immigration.

He is shown ‘slaying‘ AOC, her face edited onto the body of a giant.

The video ends with Gosar’s likeness running toward a large photo of President Biden’s face, swords in hand.

Any anime fans out there? pic.twitter.com/TxX4qiJhOi

AOC said the anime video was an example of “white supremacy” while she blasted Gosar as a “collection of wet toothpicks” who “couldn’t open a pickle jar.”

“While I was en route to Glasgow, a creepy member I work with who fundraises for Neo-Nazi groups shared a fantasy video of him killing me,” she wrote. “This dude is just a collection of wet toothpicks anyway.”

“White supremacy is for extremely fragile people and sad men like him, whose self-concept relies on the myth that he was born superior because deep down he knows he couldn’t open a pickle jar or read a whole book by himself,” she added.

So while I was en route to Glasgow, a creepy member I work with who fundraises for Neo-Nazi groups shared a fantasy video of him killing me

And he’ll face no consequences bc @GOPLeader cheers him on with excuses.

Of course, she has a right to criticize the video for its cringe factor.

But the “killing me” charge is a bit of overkill if you will. It’s anime. AOC was in as much danger in this video as she was on January 6th.

The video posted by Gosar ‘attacking’ AOC and President Biden led several prominent Democrats to have a public nervous breakdown on social media.

BREAKING: This is OUTRAGEOUS! Republican Paul Gosar tweeted an anime-themed video of him killing Alexandria Ocasio-Cortez.

Retweet if Gozar should be INVESTIGATED and EXPELLED! ✋

Representative Ted Lieu (D-HI) truly put the Lieu in ‘lieunatic,’ calling for Gosar’s removal from congressional committees after accusing him of “encouraging violence.”

Radical Republicans are dangerous. This behavior from Rep. Paul Gosar encouraging violence is unacceptable. He needs to be removed from congressional committees.

Haven’t we had enough political violence already? In any other workplace in America, he would have been fired. https://t.co/LE4UMVhBqr

Representative Eric Swalwell (D-CA), whose vacation photo from Qatar in which he was riding a camel shirtless probably caused more physical harm to people than Gosar’s video ever will, blasted the Republican lawmaker as a “bloodthirsty loser.”

Happy Monday in America, where @GOPLeader McCarthy’s colleague just posted a video of himself swinging two swords at President Biden. These blood thirsty losers are more comfortable with violence than voting. Keep exposing them. https://t.co/nlmEW9EHB4 pic.twitter.com/5BI895zvLG

Democrats haven’t been this apoplectic since Donald Trump tweeted a hilarious video in which he ‘hit’ Hillary Clinton with a golf ball.

Twitter slapped Gosar’s video with a warning indicating the tweet violated rules “about hateful conduct,” but indicated it would remain posted because they “determined that it may be in the public’s interest for the Tweet to remain accessible.” 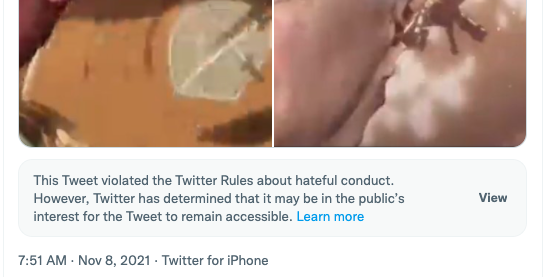 Gosar dismissed the controversy bragging, “The creativity of my team is off the hook.”