Backlash over tweets from a former reporter, Felicia Sonmez, was fast and furious, hours after NBA legend Kobe Bryant and daughter were killed in a horrific helicopter crash along with members of the Altobelli family (father, mother, and daughter).

Sonmez tweeted the following and then deleted it after the backlash: 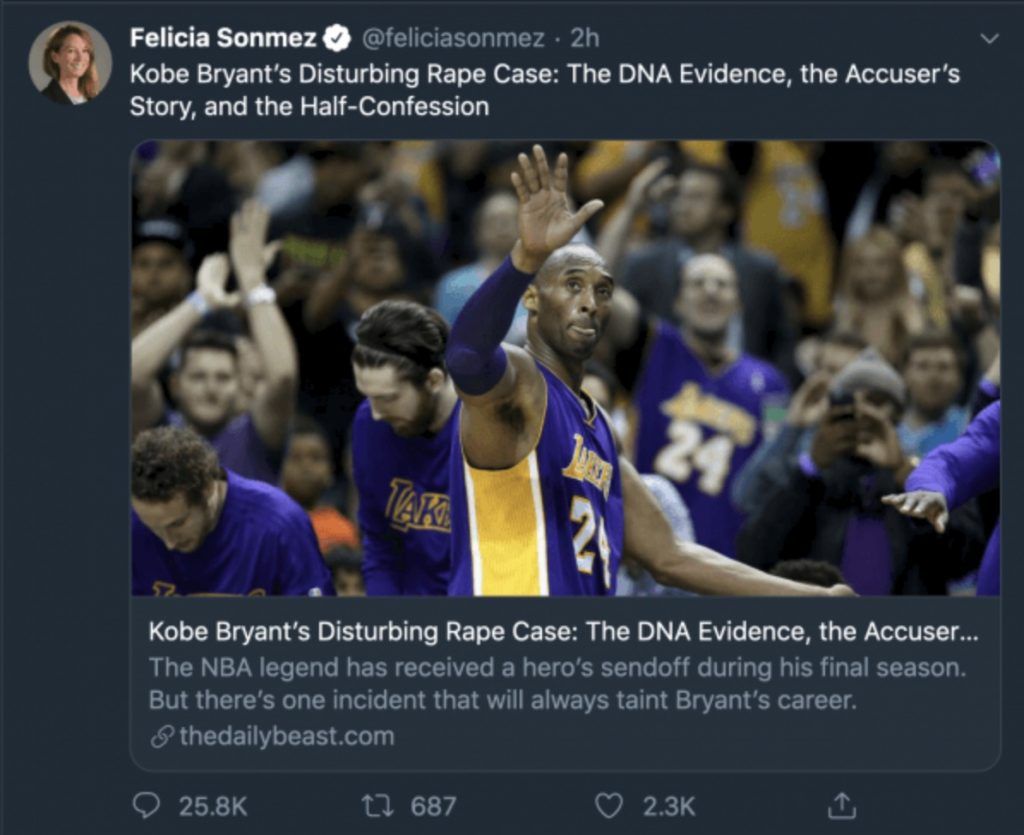 One person retweeted: “@washingtonpost you should #firefeliciasonmez for this classless and heartless post with the passing of an iconic superstar HOURS after a horrific crash that also killed his daughter and seven others along with them.”

Another tweeted the following: “@washingtonpost @JeffBezos you can’t possibly continue to employ someone this classless, unsympathetic, and unremorseful a person as @feliciasonmez. I don’t agree with cancel culture, but this is an exception.”

Listen, feel how you want to feel but why try to damper individuals who are going through a rough time. The Bryant and Altobelli family lost their daughters, both 13-years-old and you have to dredge up some nasty memories? For what purpose? Why? That had nothing to do with the helicopter crash that took nine people from this life space that you occupy. Are you that angry at life that you can’t stand someone to revere another? This woman needs help!

UPDATE: A person who works at the Washington Post says @feliciasonmez was NOT suspended for linking to the Daily Beast story on Twitter. Her suspension was related to a follow up tweet that contained a screen shot of her work email inbox, which revealed full names of emailers.

"Her managers don’t care about the Daily Beast tweet," a Washington Post employee told me. "But there’s a concern that the screen shot (of her email inbox) might create some legal issues and could violate Twitter’s terms (of service)." https://t.co/66EyVcPsex https://t.co/9JjJnC0uno

A journalist from the Washington Post has been suspended after tweeting a link to a story about Kobe Bryant’s rape case from 2016 shortly after news of his death was made public.

Felicia Sonmez, a national political reporter for the newspaper, said she received “abuse and death threats” from thousands of people after she tweeted the link to the Daily Beast story.

“Well, THAT was eye-opening,” she said. “To the 10,000 people (literally) who have commented and emailed me with abuse and death threats, please take a moment and read the story – which was written 3+ years ago and not by me.

“Any public figure is worth remembering in their totality, even if that public figure is beloved and that totality unsettling. That folks are responding with rage and threats toward me (someone who didn’t even write the piece but found it well-reported) speaks volumes about the pressure people come under to stay silent in these cases.” [Independent]

Washington Post managing editor, Tracy Grant, released a statement about Sonmez, claiming that the reporter was placed on “administrative leave” and has deleted the tweets. Grant also added: “National political reporter Felicia Sonmez was placed under administrative leave while the Post reviews whether tweets about the death of Kobe Bryant violated the Post newsroom’s social media policy. The tweets displayed poor judgment that undermined the work of her colleagues.”

Sonmez wasn’t the only one writing negative comments on Sunday afternoon, but she was a prominent one. Most of the hate-filled comments were written by people who could not put a coherent thought together, let alone a sentence. Hate is a poison that so many are taking into their systems in copious amounts because the media, Hollywood and the left are evil, venom-filled entities that gleefully dish it out to those who will not hear or see for themselves and seek the truth.

I was never taught to hate like this. When I see these disturbing comments, I try to remember there has to be more like me than them. Individuals with this much hate may never change, but I hope someday they do.

I don’t applaud the Washington Post that much because of their political views, but I will on this decision. They will probably bring her back on after this dies down, but for today, she’s not on staff.