Trump supporters began boycotting Walmarts across the country Monday for selling clothing that calls for the impeachment of President Donald Trump.

Trump supporters have been using the hashtag #BoycottWalmart on Twitter, causing the movement to become a trending issue. “Impeach 45” is printed on the clothing, which is still available on the website, despite the boycott, Fox News reported. 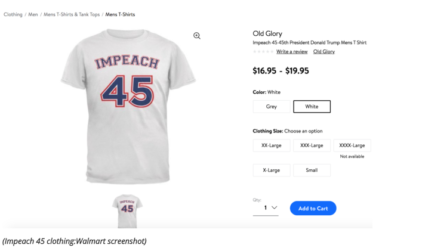 Supporters and even former White House aide Lynne Patton have gotten involved in the boycott. Patton mentioned if shirts like this were sold under former President Barack Obama, it would be “racist” and employees would be “forced to close for diversity training.”

#BoycottWalmart 😤 Imagine if they sold “Impeach 44” shirts? @Walmart would be called racist by every single celebrity on the internet & be forced to close for diversity training. 🙄 #DoubleStandard#HollywoodHypocrites#LiberalLogic https://t.co/W6kBk96Q1Y

.@walmart why are you selling Impeach 45 baby clothes on your website?????

What kind of message are you trying to send? https://t.co/PwI4nCVAZx

I’m posting this again this morning for all those who didn’t see it last night. Walmart is selling impeach Trump shirts. #BoycottWalmart pic.twitter.com/dTdGrgbm93

Walmart has yet to respond to the boycott.