The unemployment rate has fallen below 4%, and it’s at a rate that economists call “full employment.”

Given that there will always be some unemployment in an economy even when everyone can find a job (as some people will be temporarily unemployed in-between jobs, or work seasonal jobs), most economists recognize there’s a “natural rate of unemployment” of around 4-5%.

At 3.9%, the unemployment rate is clearly below that threshold, and for the first time ever, there’s one job opening for every unemployed worker.

According to the latest data from the Job Openings and Labor Turnover Survey, there were 6.55 million job openings in March. In March, there were 6.59 million unemployed, meaning there are 1.01 unemployed workers for every job.

In July 2009, just as the U.S. exited the Great Recession, there were 6.65 unemployed people for every available job. 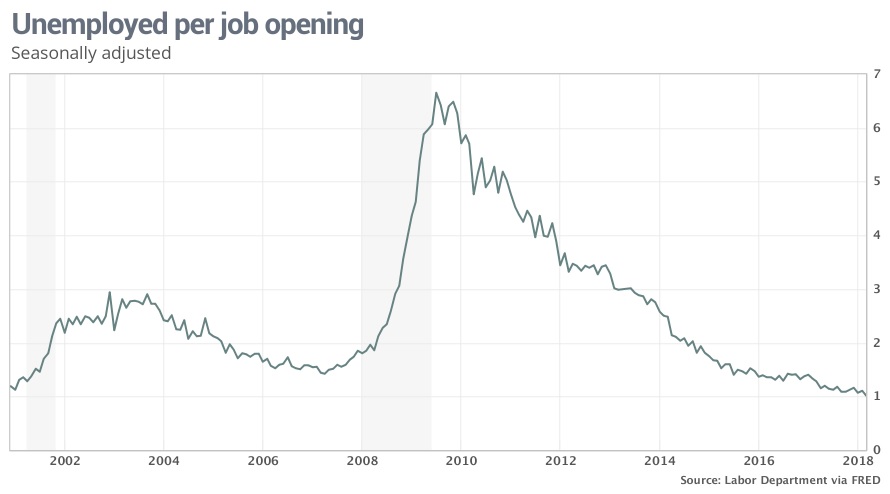 If discouraged workers (who don’t work – but aren’t counted as unemployed because they aren’t actively looking for work) are included in the mix, the unemployment rate in April was 7.8%. A high figure for sure, but slightly inflated due to the fact that it also counts workers that are employed part time for economic reasons as “unemployed,” and still at historic lows:

All that means is that despite the economy currently at “full employment,” there still is capacity for further growth in the labor force. Furthermore, many current job openings can’t be filled because of the skills gap in this country.

While we have a surplus of liberal arts majors, there is currently a whopping $272 billion worth of unfilled jobs right now. The healthcare industry alone has over 800,000 openings, with over $45 billion in salaries. The tech industry has over $20 billion in salaried positions offered that haven’t been filled.

The economy has finally come back from the Obama years, and everyone who wants a job can get one. The next phase of progress will be in the quality of jobs citizens are obtaining.

Mark Warner: Trump Aides’ Contacts With Russians Could Be ‘Coincidences,’ Not Collusion

If you actually understand statistics or have the ability to read a graph, you just might notice that the current condition is a continuation of the economic growth that started in 2010. Eight straight years of growth, the first seven were under Obama, the last one is under Trump.

The economy is not really at full employment. There are millions who remain involuntarily outside the work force. Their skills are either obsolete, don’t match the current job openings profiles or have aged badly during long term unemployment. We won’t reach full employment until these people find their way back into jobs and become productive citizens.

Trump makes unemployment go below the stated “natural rate of full employment.” Expect CNN and MSNBC to claim Trump is unnatural. Cryptography prior to the modern age was effectively synonymous with encryption, the conversion of information from a readable state to apparent nonsense. CNN is the Cryptographic New Network turning news into nonsense.

I always wondered about this count. Back in the eighties I was out of work several times for a year or more at a stretch. After my unemployment ran out I was considered no longer unemployed even though I was still looking for a job. We need a better system for counting unemployed who have exhausted unemployment benefits.

Well, according to liberals this is all obama’s doing. too bad that obama did not do this during his time in office and had to wait until President Trump was in office to see this, lol. Being on SS and living in California, we here see little of this.

“While we have a surplus of liberal arts majors, there is currently a whopping $272 billion worth of unfilled jobs right now.”

In other words, too many people are attending college as a kind of advanced daycare.

Socialist indoctrination is rather expensive. Even more so, once the “educated” student emerges with its degree in philosophy, so that it can tell others how to live, what to say, what to eat, how to think and make sure that everyone is politically correct in their form of speech. He, she or it? MUST add their contributions to the uplifting of the conservatives’ classless and slovenly merits! Right. Perhaps 3 or 4 generations have been lost in this country to socialistic brain washing. GET THE SOCIALISTS AND TEACHERS UNIONS OUT OF OUR INSTITUTIONS OF LEARNING!

The libturds will never give Trump credit for this, North Korea or anything else positive he does.

I am so happy that we prayed for Trump to win the election!!! Barry Soetero did such a massive amount of damage to our country during his 8-year reign as DICtator that I didn’t think we’d even survive as a country, let alone recover from any of the damage! Thank God for President Trump!!:-)) MAGA!!!:-)))