Barack Obama greatly expanded America’s refugee resettlement program in the wake of the Syrian refugee crisis, setting a goal of taking in 10,000 refugees a year.

While it’s a relatively small number (compared to what some European nations took in), keep in mind that many of those admitted don’t speak English, and given how poor of a country Syria is, it’s a guarantee that many are low-skilled and will toil in low-paying jobs, thus requiring permanent assistance from the government.

Attorney General Jeff Sessions (then senator) estimated in 2015 that the lifetime cost of Obama’s Syrian refugee resettlement program would be a hefty $55 billion if allowed to play out.

Given that the costs of resettling Syrian refugees in countries bordering Syria are roughly one-tenth the cost of resettling one in the West, one would think that if we were intent on helping refugees, we’d resettle ten times as many in countries where they can actually speak the language and share the culture.

Just 64 Christian Syrian refugees were admitted to the U.S. in 2016, or about 0.5 percent in a country where 10 percent are Christian. A bizarre ratio for sure, especially given that the treatment of Christians is especially bad among the warring Islamist factions in Syria.

Trump has, for the most part, fulfilled his campaign promise of ending Obama’s refugee resettlement program as we know it. This year, we’re on track to have 99% fewer refugees resettled than Obama’s last year in office.

Below is charted refugees admitted annually: 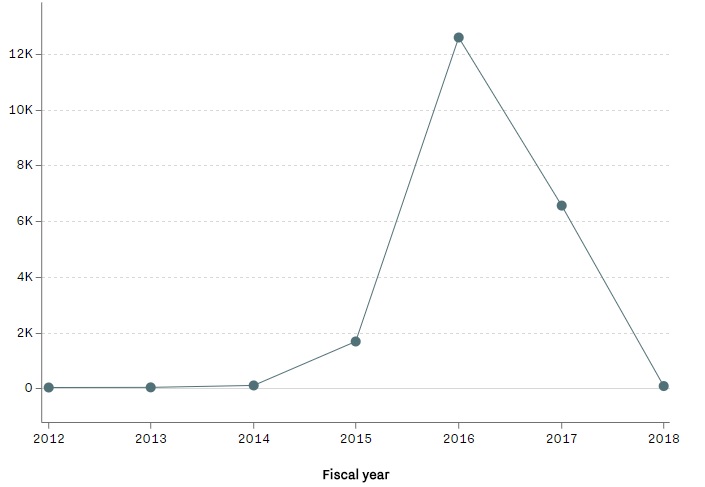 This was one of President Trump’s key campaign promises, and he kept it. The American people should be glad to know they have a president finally putting the needs of the American people ahead of the rest of the world.

Do you support Trump’s decision to end Obama’s refugee resettlement program? Let us know why or why not in the comments section below.