As we’ve reported on previously, a Harvard study of President Donald Trump’s first 100 days in office found that 93 percent of the mainstream media’s coverage was negative.

But that’s just the first 100 days! Has the media become fairer since then? Technically, yes, if you consider 91 percent negative coverage to be an improvement.

According to the Washington Times, “a wide-reaching new study from the Media Research Center finds that 91 percent of the recent coverage which aired on ABC, CBS and NBC has been negative.”

The study’s research director, Rich Noyes, remarked, “since January 20, Media Research Center analysts have reviewed every mention of President Trump and top administration officials on ABC’s World News Tonight, the CBS Evening News and NBC Nightly News, including weekends….analyzing the networks’ spin makes it clear that the goal of all of this heavy coverage is not to promote the President, but to punish him.“

Contrary to the Harvard study, the Media Search Center actually chalks this up as an increase in negativity, because their study of Trump’s first 100 days “only” found the press coverage to be 89% negative.

That’s to be expected when we live in a country where only seven percent of journalists are Republicans. 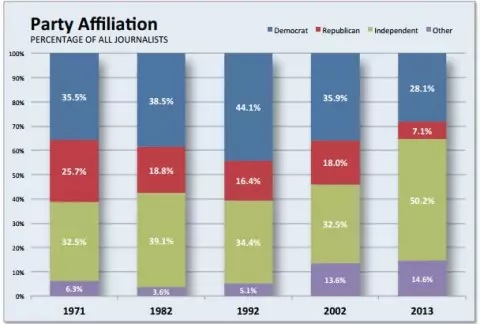 The American public’s trust in the media has fallen just as the share of journalists who identify as Republican has – perhaps because their bias is becoming more evident.

Can you really trust the media at all? I have my doubts…