While the media rewrites history because of the Bob Woodward tapes, claiming President Trump ‘knew and did nothing’ to protect Americans from the COVID pandemic, their own words and those of their favorite political party have betrayed them.

In reality, it was the media and top Democrat politicians like Joe Biden who downplayed the pandemic – even attacking President Trump for taking the virus seriously.

The President’s role as a leader requires him to make public statements that quell panic and project calm and confidence. It’s a relatively understood tactic for America’s leader.

That said, Trump stands accused of telling Woodward on February 7th that the COVID pandemic was “more deadly than your, you know, your — even your strenuous flus,” while telling him a month later that he “wanted to always play it down … because I don’t want to create a panic.”

Most people understood why the President would make such comments. But the media and the Democrat Party aren’t most people. They’ve seized on the opportunity to accuse Trump of downplaying the crisis and doing nothing to stop it.

One accusation is hypocritical, while the other is simply false.

The media is lying when they say @realDonaldTrump ‘knew and did nothing.’

The media is a dying industry in this country, and false narratives like this are exactly why they are the enemy of the American people.

RELATED: Biden – Just Like Trump – Told Americans Not To ‘Panic’ About COVID At Beginning Of Pandemic

Hypocrisy comes in the form of the mainstream media and their keepers – the Democrat Party – criticizing President Trump of downplaying the threat of the virus to the American people.

Nobody did this more than they did. Yet they have the gall to pretend as if they knew all along how bad things were going to get, sanctimoniously pointing accusatory fingers at the President for having blood on his hands.

The examples are legion, and glaring in how hypocritical they are:

Vox: “factual, reliable, clear journalism is more important than ever.”

Also Vox: “Is this going to be a deadly pandemic? No.” pic.twitter.com/YqXVXwz19X

Democrat lawmakers weren’t much better as they also went out of their way to downplay the threat in the United States.

House Speaker Nancy Pelosi told people to leave their concerns behind and head on down to San Francisco’s Chinatown in late February – after President Trump banned travel from China.

“What we’re trying to do today is to say everything is fine here,” Pelosi said. “Come because precautions have been taken. The city is on top of the situation.”

February 24: The Trump Administration sent a letter to Congress requesting at least $2.5 billion to help combat the spread of the coronavirus.

Incidentally, this is the same day @SpeakerPelosi was telling constituents to come down to Chinatown.https://t.co/MCVcpeJlV3

New York City mayor Bill de Blasio was telling people to “go on with your lives” and hit the movie theaters despite the threat.

This was the day after @NYCMayor told New Yorkers to go to the movies, even offering recommendations.

We are in the midst of a crisis with the coronavirus. We need to lead the way with science — not Donald Trump’s record of hysteria, xenophobia, and fear-mongering. He is the worst possible person to lead our country through a global health emergency.

Editor’s Note: H/T Twitter user @ally_gardner for this collage of headlines from the media downplaying the coronavirus: 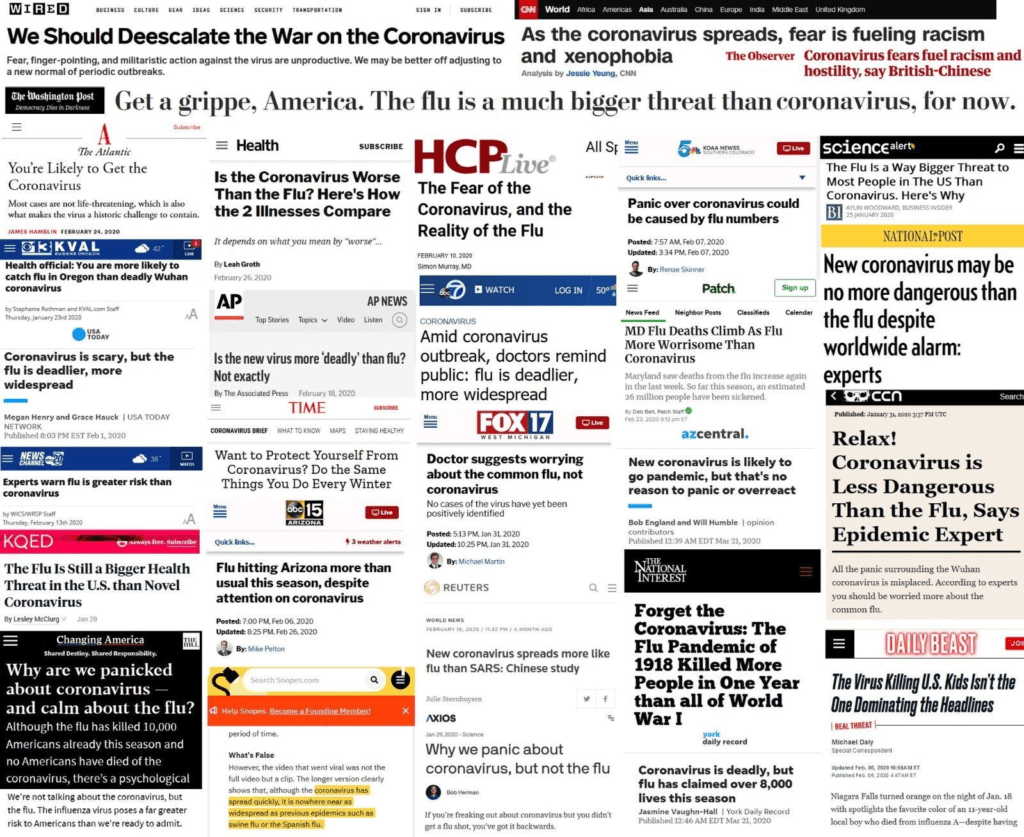 The second part of the media narrative is to suggest President Trump did nothing to stop the spread – a provable, bald-faced lie.

Unserious journalists make that accusation based simply on the President having told Woodward on March 19th that he “still like(s) playing it down.”

His administration’s actions up until that date show a man taking definitive action behind the scenes.

By the date in question, President Trump and his administration had done the following:

What had the Democrats and the media focused on during that time? Impeachment. And any other coverage that would reflect poorly on the President.

They have no interest in protecting the American people. President Trump did. He took action. And that is the only thing that matters.

Take a look at the entire timeline:

Woodward Thread by grusbf5 on Scribd