The media has been a circus this past day, all managing to misquote Donald Trump in the exact same way to make his comment appear racist. One might say the media’s phrasing was intentional.

President Trump was speaking about the MS-13, a gang that dominates in El Salvador, and has a presence in the United States (with most members being illegal immigrants). The comment came during a conversation between Trump and Fresno County Sheriff Margaret Mims:

SHERIFF MIMS: Thank you. There could be an MS-13 member I know about — if they don’t reach a certain threshold, I cannot tell ICE about it.

THE PRESIDENT: We have people coming into the country, or trying to come in — and we’re stopping a lot of them — but we’re taking people out of the country. You wouldn’t believe how bad these people are. These aren’t people. These are animals. And we’re taking them out of the country at a level and at a rate that’s never happened before. And because of the weak laws, they come in fast, we get them, we release them, we get them again, we bring them out. It’s crazy.

And here’s how 99% of the media reported on that exchange. 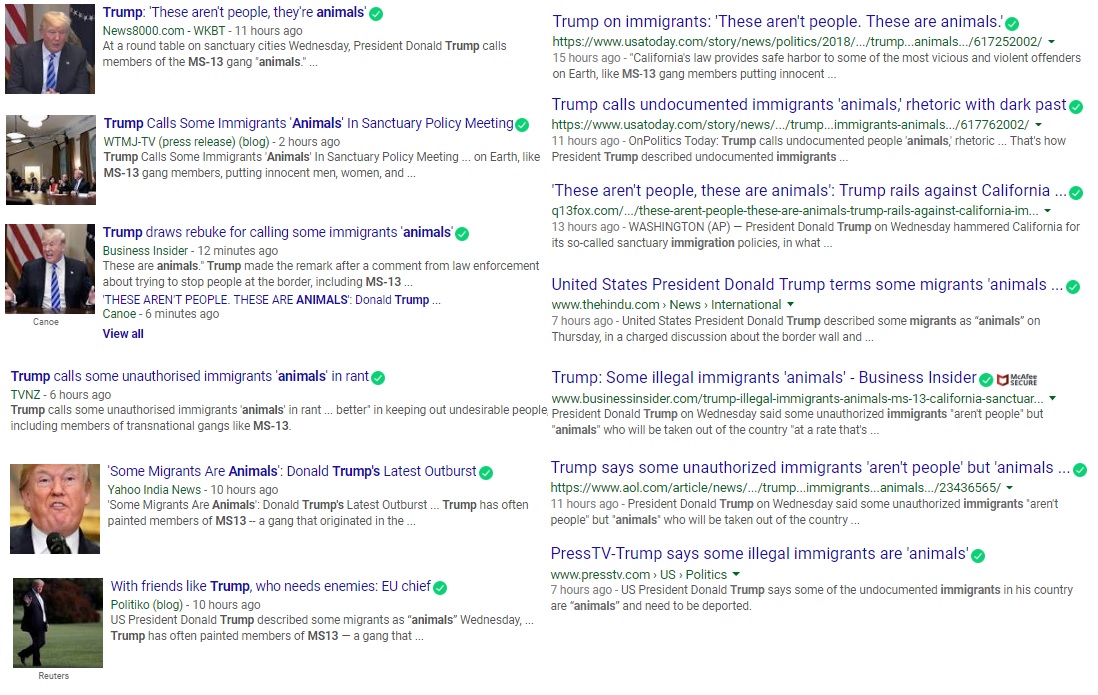 Despite the obvious context, the usual clueless left-wing talking heads were all over the distortion.

You have to see this.

Donald Trump's bigotry and dehumanization of immigrants is on full display here.

"These aren't people, they're animals."

He really did just say that. pic.twitter.com/1szjtVpSzC

Who said this, Hitler or Trump? "These aren't people. These are animals." https://t.co/VJwrbYdKne

A tough take down by the California governor after @realDonaldTrump calls people trying to get into the country "animals" not people. https://t.co/LPKiHPJaWZ

this is disgusting. and his evanglical sycophants will applaud his utter dehumanization of men, women and children https://t.co/qYbl6avzL1

Even those on the Left that correctly acknowledged the context managed to have an insane response to Trump’s comments.

You hear that everyone? MS-13 are people too!

There’s really only two options to explain the mass delusion in the mainstream media’s reporting on Trump’s comments here. Either they’re all clueless and all repeated the same narrative without even reading Trump’s comments in full, or they lied deliberately to make Trump sound like a racist.

Given how the media has treated Trump over the past three years, which do you think is more likely?

Does the left owe President Trump an apology? Share your thoughts with us in the comments section below!