Given their strategy of becoming increasingly radical as the midterms approach, it’s clear that the Democrats aren’t tired of losing just yet.

The issue of illegal immigration has long been a bipartisan one. When Bill Clinton spoke about securing the border and thwarting illegal immigration during his State of the Union addresses, it was to a standing ovation. Even in more recent times, you only have to go back to the Obama Presidency to find similar anti-illegal immigration rhetoric. Or just listen to their last Presidential candidate, of all people:

There is a growing partisan divide today, but it isn’t because the Right-wing is moving further right, it’s because the Left has gone off the hinges ideologically. The Pew Research Center has a 10-item scale of political values to determine ideological purity among respondents over the years, and you can see in the chart below who has been moving towards the extreme. You can see the views of the median Republican have become a fraction more conservative, while Democrats have moved from center-Left to far-Left.

Most of the shift occurred in the last few years, so the chart is a bit redundant in that it’s measuring since the 1990s, but it was the only one Pew had available. 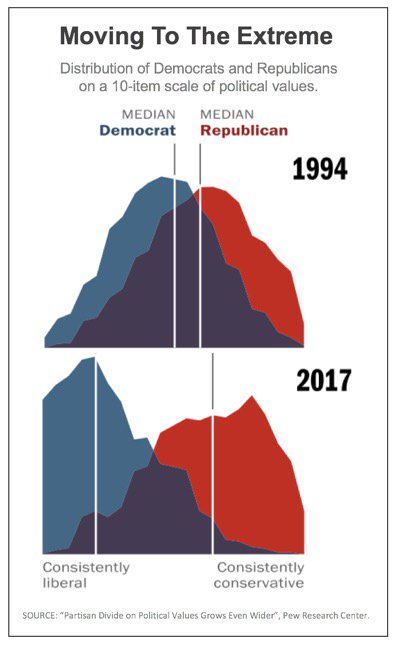 And while this extreme shift has been in response to the administration of Donald Trump, it’s exactly the wrong strategy.

Moving back to the issue of illegal immigration, let’s consider the issue of Immigration and Customs Enforcement (ICE). It’s becoming increasingly common for Democrats to come out calling for the complete abolition of the agency, which last year made nearly 5,000 gang arrests, including nearly 800 members of the vicious MS-13, taking them off the streets. (RELATED: ‘Abolish ICE’ Protest Ends With 12 Arrests, Accomplishes Nothing). There were also 518 human trafficking victims saved by the agency, and 904 children rescued from exploitation.

In direct contrast with reality, new Democrat darling Alexandria Ocasio-Cortez has blasted ICE for “the draconian enforcement that has happened since 2003 that routinely violates our civil rights, because, frankly, it was designed with that structure in mind.” (RELATED: Ocasio-Cortez Says Illegal Immigration Was Not Criminalized Before 1999).

How could someone oppose ICE? That’s a question Democrats need to ask themselves – because the American public certainly isn’t on board with their latest campaign.

According to Politico, “a new POLITICO/Morning Consult poll shows that most voters oppose eliminating ICE. Only 1 in 4 voters in the poll, 25 percent, believe the federal government should get rid of ICE. The majority, 54 percent, think the government should keep ICE. Twenty-one percent of voters are undecided.”

The group that supported abolishing ICE the most was Democrat voters (no surprise there), but not to an extent that should comfort Party officials. After all, it was only 43 percent of Democrats that supported abolishing ICE in their poll. While a smaller 34 percent favor keeping the agency, it shows that not even a majority of Democrats are in agreement on this one.

Outside of the fringe portion of the Democrat Party (which depressingly is nearly half of them), abolishing ICE is a losing position to advocate for. Let’s pray to God they don’t stop campaigning on it until after the midterms.