If only he was right.

Unfortunately, the border around the welfare state today is about as weak as our actual border. Illegal immigrants are a burden, and welfare is the least of our worries. Of all federal outlays on illegal immigrants, 27% is devoted towards “administration of justice,” while 21% is medical, an 29% are “general expenditures.” Only 16% of costs are due to public assistance. At the state level, almost all the costs are related to education, Medicaid, and justice.

FAIR is out with an updated study this month, and, as you’d expect, the cost of illegal immigration to the economy increased. The net cost increased from the $113 billion their 2010 study found to $116 billion now. Even after accounting for taxes paid by illegal immigrants, they’re still a massive burden on the overall economy. 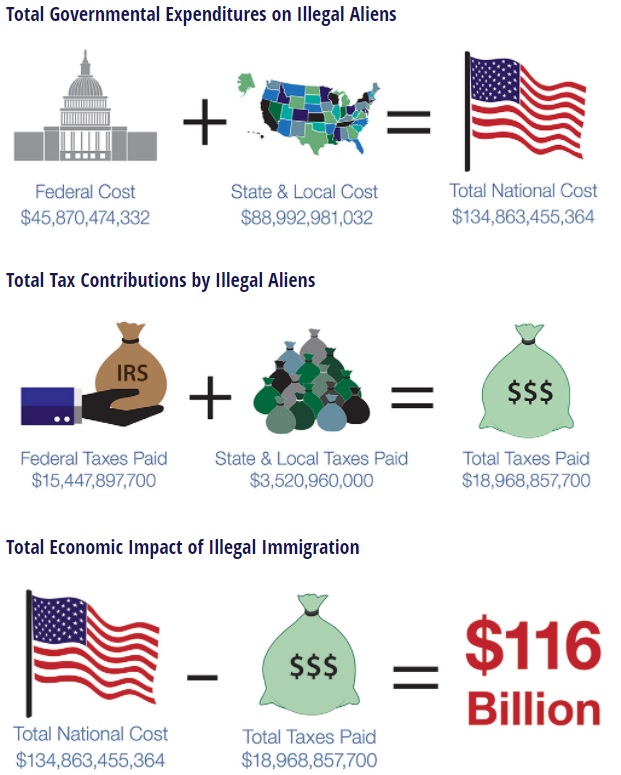 The figures are based off an estimated 12.5 million illegal immigrants in the U.S., but there could be as many as fifteen million, meaning these figures are an understatement.

Personally, I take issue with FAIR including taxes paid by illegal immigrants into their calculations. After all, ask yourself the question: Would the government be receiving this money regardless without illegal immigrants? Of course. It’s a myth that there are jobs that Americans “just won’t do.” If illegals weren’t working those jobs, Americans would be doing them at higher wages, paying more in taxes. While the study did account for those illegals who do pay federal taxes, the fact of the matter is that the overwhelming majority do not.

In fact, a separate study published earlier this month found that the cost of illegal immigration in terms of lost taxes is an astounding $300 billion – more than we pay them and their children in benefits!

The only silver lining is that it’s liberal states like California that are bearing the cost burden.

Share this story if you think it’s time to stop illegal immigration!

Another GOP Leader Calls For McConnell To Step Down