Foolproof Plan to Get Rid of Leftist Looters

It happens with every natural disaster or in the backdrop of leftist riots – local businesses fall victim to looters who take advantage of terrible circumstances to steal their wares.

In the wake of Hurricane Harvey in late August, for example, Houston Police Chief Art Acevedo announced that he and his department would push for the fullest prosecution possible for any crimes committed.

Yet #BLM supporters encourage looting in #houston of only white own businesses and Trump supporters. Despicable. pic.twitter.com/wviLhiEZiN

“This is the state of Texas. We are a welcoming city, but we are not going to tolerate people victimizing others,” Acevedo said, as he announced that over a dozen people had been arrested.

Think about it – Nothing frightens a liberal more than historical statues and job applications.

So we thought, why not combine those two things …. 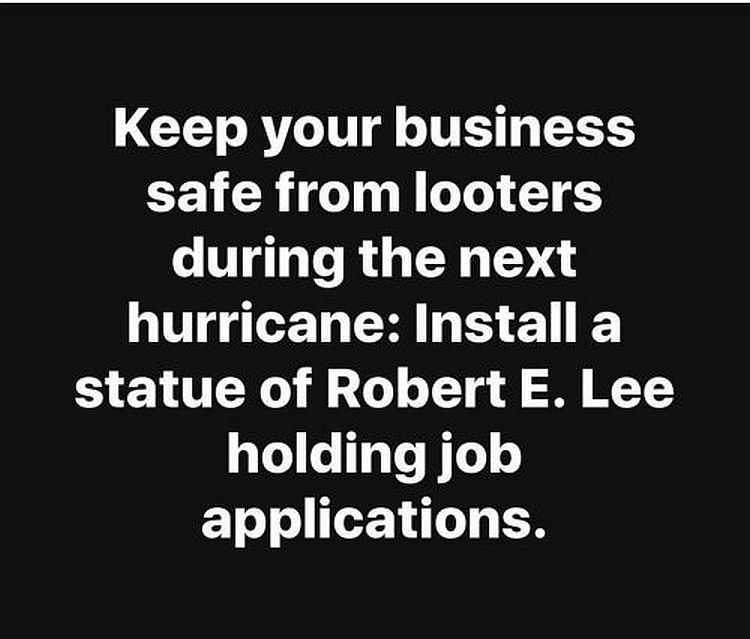 The concept is twofold – draw the Antifa thugs in by tempting them with possible destruction of a Confederate statue, then repel them for good with the concept of actually working for a living.

Police departments across Florida have taken to Twitter to warn against looting in the wake of Hurricane Irma. https://t.co/ZAJBjpdRcl pic.twitter.com/Kt6U155vSR

In February, a study out of Germany analyzed nearly 900 left-wing political activists and concluded that 92% of them still live at home with their parents.

As such, we know for sure that they’d go fleeing from anything that might involve getting a job.

Even Hillary Clinton recognized that liberal protesters aren’t big fans of getting a life.

Some are new to politics completely. They’re children of the Great Recession. And they are living in their parents’ basement. They feel they got their education and the jobs that are available to them are not at all what they envisioned for themselves. And they don’t see much of a future.

Perhaps not, but they certainly know opportunity when they see it, and the opportunity to loot and riot is just too rich for them to pass up.

Until now. This plan will surely work, unlike the losers who take part in looting.