Former Milwaukee County Sheriff David Clarke says Cory Booker’s temper tantrum directed at Homeland Security Secretary Kirstjen Nielsen shows he has issues that disqualify him from ever holding the office of the presidency.

“It is apparent to me that Booker lacks the temperament to be a future candidate for President of the United States,” Clarke said.

Come on, does this look like a guy with anger management issues? 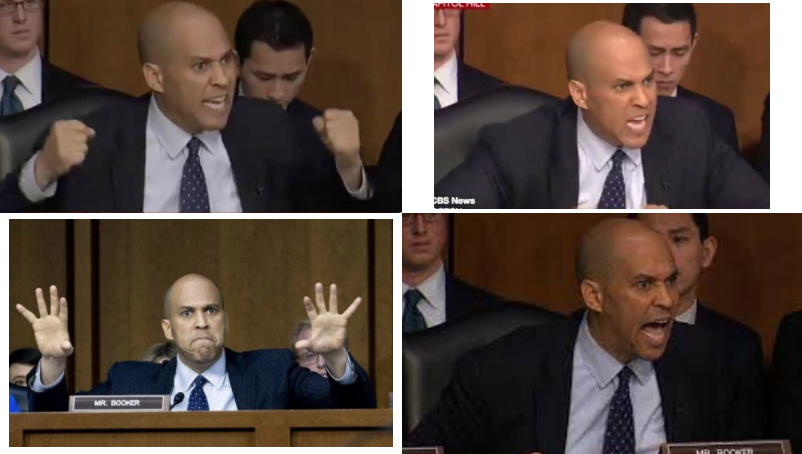 Clarke added that had Booker done this to a female staffer, he’d be facing serious – and quite possibly legal – consequences.

After today’s embarrassing display on the Hill by Sen Booker in dressing down a female Cabinet member, it is apparent to me that Booker lacks the temperament to be a future candidate for President of the United States. If he dressed down a staffer that way, He’d be in trouble. pic.twitter.com/oIPxzGocqR

In other words, Booker has about as much chance of being elected President as his imaginary friend T-Bone.

Had Booker been a Republican and the woman being ‘dressed down’ in that manner was a Democrat or member of a Democrat administration, their career would be over faster than it would take to go through a binder full of women.

Sheriff Clarke actually makes a good point here – could you imagine if a Republican man talked to a woman the way Cory Booker talked to Kirstjen Nielsen today. They would be publicly shamed for being “sexist”. But SJW’s are labeling Booker a hero for his actions. Such hypocrisy! https://t.co/L3BZLY6wWM

“Picture it,” he wrote in an e-mail. “A male Republican senator spends his entire 10 minutes ‘mansplaining’ the female DHS secretary about immigration policy, throws around the term ‘conscientious stupidity,’ yells at her the only time she tries to speak, and concludes his diatribe without even asking her to respond.”

“There’d be so many triggered Democrats that there’d be a hashtag within minutes, campus protests across the country, and the topic-du-jour for celebrities at Hollywood’s next award show,” Ahrens said.

Of Nielsen’s refusal to back down to Booker he quipped, “Nevertheless, she persisted.”

Lest anyone doubt the accuracy of such a double standard, recall that New York Republican Rick Lazio once challenged Hillary Clinton during a Senate debate to sign a pledge on soft money, only to be pilloried for being a misogynist who had invaded her personal space.

We’re just surprised that Booker would play the role of a male trying to intimidate a female so quickly after professing his love for, well … just take a look.

Despite the tirade, Booker did manage to keep in touch with his feminine side a little bit.

“When Dick Durbin called me I had tears of rage when I heard about his experience in this meeting, and for you not to feel that hurt and that pain … that’s unacceptable to me!”

So which is it Booker – big bad intimidating macho male, or teary-eyed, tampon-tax-fighting feminist?

Should Cory Booker apologize for his temper tantrum? Share your thoughts below!