“What if these bodies of tortured, dead civilians were staged?” the former congressman tweeted, alleging these were, or would be, questions asked by Carlson.

“What if they’re fake? What if the Ukrainian military killed them & then blamed Russia? I’m not saying any of this is true, I’m just asking the questions. Why can’t we ask these questions?”

.@TuckerCarlson tonight: “What if these bodies of tortured, dead civilians were staged? What if they’re fake? What if the Ukrainian military killed them & then blamed Russia? I’m not saying any of this is true, I’m just asking the questions. Why can’t we ask these questions?”

Despite the obviously manufactured comments, the use of, and apparent misunderstanding by Walsh of what quotation marks are, had some people believing it to be an actual statement on the part of the Fox News personality.

With that in mind, the cast of gullible rubes you’d expect came along, sharing Walsh’s tweet and offering their take on what they were reading.

“I gotta say, if [Tucker Carlson] is not a Russian asset he should be, he is absolutely over-qualified for the job,” he said retweeting the manufactured comments. “Is he a Russian asset? I don’t know, just asking questions.”

I gotta say, if @TuckerCarlson is not a Russian asset he should be, he is absolutely over-qualified for the job. Is he a Russian asset? I don’t know, just asking questions https://t.co/1Vw4zYAMpD

She shared Walsh’s tweet adding, “It’s almost like Tuckums is getting his show scripts straight from the Kremlin or the GRU.”

Joyums, of course, is the same MENSA candidate who wrote homophobic blog posts – allegedly – then claimed she was hacked. Carlson last week joked about whether or not Vladimir Putin had been the hacker.

It’s almost like Tuckums is getting his show scripts straight from the Kremlin or the GRU… https://t.co/slVQfnqV5e

There were a handful of others who were duped by the Joe Walsh tweet, desperately wanting a cudgel to use against the successful Fox News host.

Many of them involved even less relevant people than Kinzinger and Reid.

.@WalshFreedom fabricated a quote attributed to Tucker Carlson that went viral & was quoted as real by journalists & influencers on Twitter. pic.twitter.com/43nfeurT0R

What makes Kinzinger’s comments of interest is the fact he currently serves on the House select committee investigating the Capitol riot. Meaning, that he’ll desperately want you to believe the biased committee’s findings even as he is spreading obviously fake news.

Journalist Glenn Greenwald ended Kinzinger for falling for the hoax.

“The incomparably dumb and unhinged @AdamKinzinger took a fabricated quote from long-time-deadbeat-dad-turned-liberal-hero @WalshFreedom, believed it true, and used it to declare a journalist a ‘Russian asset,'” he fumed.

The incomparably dumb and unhinged @AdamKinzinger took a fabricated quote from long-time-deadbeat-dad-turned-liberal-hero @WalshFreedom, believed it true, and used it to declare a journalist a “Russian asset” – just as hordes of dumb liberals did with @TheRickWilson‘s fake quote. pic.twitter.com/vhRaKDy6wE

This isn’t the first time Kinzinger has fallen for manufactured news.

Just weeks ago, the lawmaker showed support for the so-called “Ghost of Kyiv” – only what he shared was a long-running joke meme of a character known as “Samuel Hyde.”

He quickly deleted the poorly photoshopped tweet hoping nobody would notice.

Keep in mind, Kinzinger serves on the House Foreign Affairs Committee, and still fell for a hilarious joke. 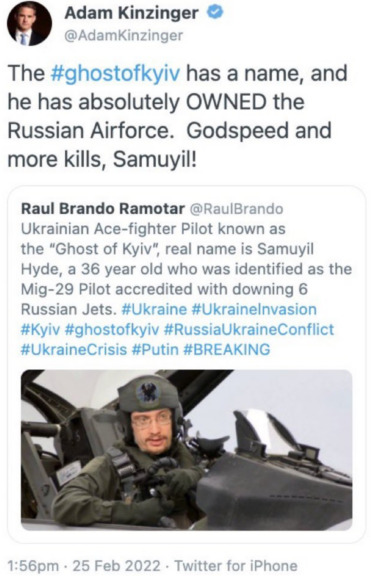 Prior to that, the same select committee Kinzinger serves admitted to altering a text message presented by Representative Adam Schiff as evidence.

In its original form, the text was a three-paragraph summation of a legal briefing by lawyer Joseph Schmitz to Meadows, as forwarded by Jordan.

Schiff presented the text message as having come from Jordan himself, rather than having been forwarded information, reduced the summary to one paragraph which itself was truncated, and added a period to create the illusion of it being the full statement.

The committee even created a graphic complete with a logo bearing similarities to a chat icon to make it appear as if it was a singular text message.

Breaking: Following @FDRLST reporting that Adam Schiff and his staff doctored a text message between Jim Jordan and former WH chief of staff Mark Meadows, the House Jan. 6 committee has just admitted that it did, in fact, doctor the text message.https://t.co/78aRNyOib7

It seems there isn’t much that Kinzinger isn’t willing to believe if it casts a negative pall on his political adversaries.

Of course, had there been any question as to the authenticity of Walsh’s “quote” from Tucker Carlson, Kinzinger could have asked the Fox News host himself.

Carlson recently put out an open invitation for the congressman to appear on his show.

“Adam Kinzinger is always invited on the show,” he said. “Any time. We will give him the hour. Mr. Tough Guy.”

Kinzinger instead put out a statement declining the invitation.

Tucker Carlson invited me on his show tonight, but that’s not going to happen…ever. While he echoes Putin’s lies, I’ll remain focused on supporting the Ukrainian people. My video statement: pic.twitter.com/plfOhh6bNb

“His show is full of Russian propaganda and not news, and I will not validate his show by making an appearance,” Kinzinger claimed. “I do not want to be associated with it in any way.”

“When Tucker interviews someone in a hostile way, he interrupts and laughs when he’s been caught in a lie,” he whined.

Walsh, meanwhile, refused to apologize for publishing the fake quotes and suggested the real story is that there are people dumb enough to believe them.

“Here’s what’s funny: So many people read this tweet [and] believed Tucker had already said it,” Walsh said of the controversy. “Which is understandable becuz it’s EXACTLY the kind of thing Putin-lover Tucker would [and] has said.”

I tweeted this out this morning. I was predicting what @TuckerCarlson would say “tonight.” Here’s what’s funny: So many people read this tweet & believed Tucker had already said it. Which is understandable becuz it’s EXACTLY the kind of thing Putin-lover Tucker would & has said. https://t.co/dxDLDjOPK1

“I didn’t fabricate a thing,” Walsh claimed, suggesting his quotes weren’t meant to be read as actual quotes. “I sent that tweet b4 Tucker’s show, said ‘tonight’ predicting what he’d say.”

“And btw, @AdamKinzinger is a great public servant & patriot.”

That is also fake news.