The January 6 select committee investigating the Capitol riot has admitted to altering a text message presented by Representative Adam Schiff as evidence earlier this week.

In its original form, the text was a three-paragraph summation of a legal briefing by lawyer Joseph Schmitz to Meadows, as forwarded by Jordan.

Schiff presented the text message as having come from Jordan himself, rather than having been forwarded information, reduced the summary to one paragraph which itself was truncated, and added a period to create the illusion of it being the full statement.

The committee even created a graphic complete with a logo bearing similarities to a chat icon to make it appear as if it was a singular text message.

“Not only did Schiff misrepresent the substance of the text message and its source, he even doctored original text messages,” writes Sean Davis of The Federalist, who obtained the original message in its entirety and revealed the ploy.

Breaking: Following @FDRLST reporting that Adam Schiff and his staff doctored a text message between Jim Jordan and former WH chief of staff Mark Meadows, the House Jan. 6 committee has just admitted that it did, in fact, doctor the text message.https://t.co/78aRNyOib7

RELATED: Nancy Pelosi On Schiff’s Made Up Trump Phone Call: ‘He Did Not Make It Up’

Representative Adam Schiff (D-CA) read the text message in a hearing Monday evening and put the graphic up on the screen.

“I want to display just a few of the message[s] he received from people in Congress,” Schiff said, referring to Meadows. “The committee is not naming these lawmakers at this time as our investigation is ongoing. If we could cue the first graphic.” 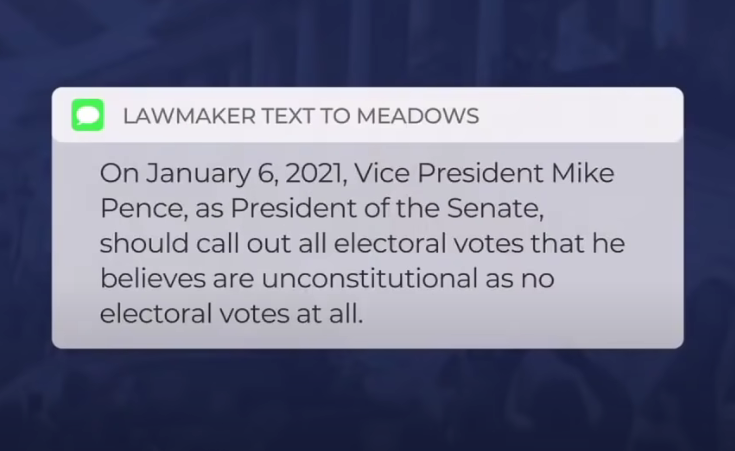 Schiff’s bombshell text message, however, is missing significant portions of context and a basic understanding that the words themselves did not come from the lawmaker (Jordan) but were a summary of an argument from a lawyer hypothesizing about what Vice President Mike Pence could do.

Here is the full message that was forwarded to Meadows. Note the one presented by Schiff’s brevity and insertion of punctuation to put a point on what they want people to focus on.

On January 6, 2021, Vice President Mike Pence, as President of the Senate, should call out all the electoral votes that he believes are unconstitutional as no electoral votes at all — in accordance with guidance from founding father Alexander Hamilton and judicial precedence.

To aid in providing a better visual representation of what Schiff omitted, we took that message and inserted where the period had been added in the committee’s graphic, and outlined the missing context in red.

RELATED: CNN Analyst: Yeah, I Made Up That Conversation Between Two Senators Shocked At Trump’s Action

Following Davis’ investigative report, The Federalist received an email from a Democrat spokesman for the January 6 committee in which they “confessed that the committee doctored the text message.”

“In the graphic, the period at the end of that sentence was added inadvertently,” the spokesman said according to the outlet. “The Select Committee is responsible for and regrets the error.”

Neither of those words applies. They didn’t ‘inadvertently’ add a period. And dropping two-and-a-half paragraphs from the entire message wasn’t an ‘error.’

I, for one, am shocked that Adam Bennett Schiff, a United States Congressman, fmr federal prosecutor, and close friend of Jake Tapper, would tamper text message evidence and leak it to the media. Shocked I tell you!

The committee spokesman was kind enough to provide the entire forwarded message, as they said, “in the interests of transparency.”

Conservative constitutional scholar Mark Levin, in an appearance with Fox News host Sean Hannity, called for an ethics complaint to be filed against Schiff, who has done this kind of thing in the past.

Mark Levin on Hannity calls for a “serious ethics complaint” to be filed against Adam Schiff with the ethics arm of the California Supreme Court for “doctoring” Jim Jordan’s text message to Mark Meadows, and seek to rid him of his law license pic.twitter.com/lR5gC1ayxW

“Enough is enough. We can whine about it all we want. He’s got the media playing out of his hand. This guy is unethical,” railed Levin.

I agree. We should begin the process. https://t.co/CvBP2LDSqY

Former President Donald Trump issued a statement regarding Schiff and the committee’s actions.

“What a disgrace this sleazeball is. Shifty Adam Schiff is a disgrace to America,” Trump said. “What is going to be done about this?”

Likely nothing. Since that’s what happened to Schiff for previously submitting altered evidence into the Congressional record.

Schiff undeniably fabricated quotes as he led off a hearing with acting Director of National Intelligence Joseph Maguire in 2019 by making up a phone call between then-President Trump and Ukraine President Volodymyr Zelensky.

ABC News’ anchor George Stephanopoulus even confronted Schiff over the incident shortly thereafter, playing the clip of the disgraceful display and stating, “That was you making up dialogue, putting it in the president’s mouth.”

The California Democrat defended his actions by saying he was simply engaged in a parody.

What will his defense be this time around?

After Whoopi Goldberg Is Exposed To Someone With COVID-19, ‘The View’ Goes Down To Three Hosts

Hunter Biden Admits Laptop is Real, Threatens Tucker With Lawsuit, Wants Criminal Probe of Those Who Reported on His ‘Personal Computer Data’