Over the weekend, Democrats and their allies in the liberal media predictably had a unified freak-out after President Donald J. Trump issued an Executive Order temporarily limiting refugees from terror-prone nations into this country.

Rather than report the facts about the president’s Executive Order, the left has so far falsely claimed Trump has issued a “Muslim ban,” when nothing could be further from the truth.

Thousands of protesters showed up at airports around the country, feigning outrage.

Where was the supposed liberal outrage when President Obama blocked all Iraqi refugees from entering the United States in 2011? This sums it up:

The order also “imposes a temporary, 90-day ban on people entering the U.S. from Iraq, Syria, Iran, Libya, Somalia, Sudan, and Yemen. These are countries either torn apart by jihadist violence or under the control of hostile, jihadist governments.”

The ban is in place while the Department of Homeland Security determines the “information needed from any country to adjudicate any visa, admission, or other benefit under the INA (adjudications) in order to determine that the individual seeking the benefit is who the individual claims to be and is not a security or public-safety threat.” It could, however, be extended or expanded depending on whether countries are capable of providing the requested information.

The ban, however, contains an important exception: “Secretaries of State and Homeland Security may, on a case-by-case basis, and when in the national interest, issue visas or other immigration benefits to nationals of countries for which visas and benefits are otherwise blocked.” In other words, the secretaries can make exceptions — a provision that would, one hopes, fully allow interpreters and other proven allies to enter the U.S. during the 90-day period.

Importantly, one major aspect is totally left out of the liberal media’s narrative. As we pointed out this morning, the countries listed in the Executive Order:

…were chosen by Barack Obama and Congress as a security threat.

Nowhere does this ban mention “Muslims.”

Furthermore, if President Trump has supposedly issued a “Muslim ban” on the more than 1.6 billion Muslims worldwide, then why were more than 40 Muslim-majority countries, including those with the largest Muslim populations, excluded from the Executive Order? Could it be because the left’s claim of a “Muslim ban” is false? Below is a list of the most populous Muslim countries in the world courtesy of Pew Research Center: 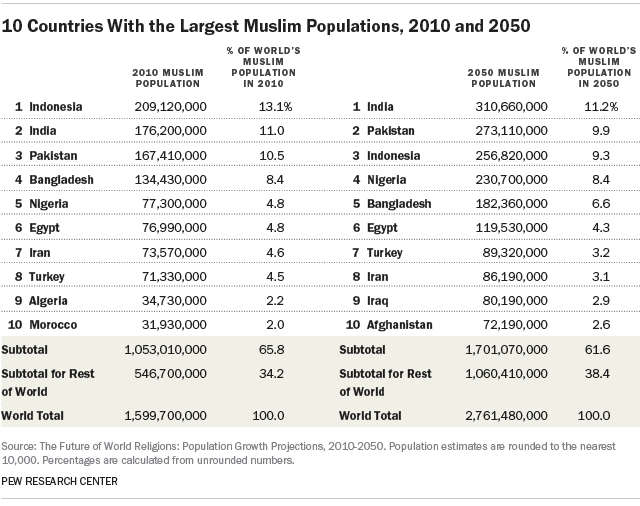 As you can see from the chart above, the six countries with the largest Muslim populations across the world are excluded from Trump’s Executive Order, which refutes the liberal claim that the president wants to ban all Muslims from this country. Some simple fact-checking from the left is needed.

Since they won’t do it, we will.

Are you surprised that liberals are running around the country falsely claiming President Trump has instituted a “Muslim ban”? Do you support the President’s Executive Order? Share your thoughts below!