Democrat Raphael Warnock has been declared the winner of one Georgia Senate run-off race by several outlets – though Republican Kelly Loeffler refuses to concede.

In the other race, Jon Ossoff (D) currently leads David Perdue (R) by over 12,000 votes in another.

The nightmare scenario Republicans have been warning about since November appears to be on the verge of fruition.

All signs are pointing to a Democratic-led Senate, as well as an already Democrat-controlled House, being handed to a potential President-elect Joe Biden on January 20.

Warnock, the abortion-supporting, military-loathing, Jeremiah Wright and Fidel Castro-admiring Democrat, was declared the victor by most major media outlets by late Tuesday night.

Loeffler however, refused to concede, insisting she has “a path to victory.”

Perdue’s campaign issued a statement reflecting the nail-biter his race against Ossoff had emerged to be: “This is an exceptionally close election that will require time and transparency to be certain the results are fair and accurate and the voices of Georgians are heard.”

The race between Republican Sen. David Perdue and Democrat Jon Ossoff hasn’t been called. Democrats need to win both contests to take the Senate. https://t.co/hNUOYLqCSN

What It Means If Democrats Control The Senate

Honestly, if you’re not quite sure what Democrat control of the Senate means for America by now, we implore you to read the Political Insider’s extensive coverage on the matter.

Perhaps President Trump put it in the most succinct terms possible.

“If you don’t vote, the socialists and the communists win,” he said at a campaign rally in early December.

Well, guess who appears to have emerged victorious?

President @realDonaldTrump: “If you don’t vote. The socialists and the communists win.” pic.twitter.com/VLhaX0iKKa

One House Democrat Tuesday night posted a veritable wish-list of goals that can be accomplished with a Biden presidency and their party in control of both houses of Congress.

Rep. Chris Pappas (D-NH) reminded voters that action could be taken on the DREAM Act, legislation granting legal status to over 11 million illegal immigrants brought to America as children.

Pappas also notes Democrats could pursue extreme agendas on climate and an expansion of voting that, as the New York Times explains, would “trample on states’ ability to dictate their own election rules by abusing measures in place to prevent voter disenfranchisement.”

Flipping the Senate would be huge to get votes on popular bills blocked by Mitch McConnell:

… the list goes on, and on, and on. America needs this.

RELATED: Trump To Georgia Voters: If You Don’t Show Up, Socialists And Communists Win

It Was Nice To Know America While We Could

It gets much worse, however, when you consider Democrats have been openly pining for such radical and extreme platforms such as packing the Supreme Court, defunding police departments, granting statehood to Washington, D.C. and Puerto Rico, and abolishing the Electoral College.

Go take a look at the Georgia election maps for the Warnock-Loeffler and Ossoff-Perdue races and you’ll see why preserving the Electoral College is so vitally important in this nation.

Without it, you would have the presidency decided by a select few deep-blue Democrat states such as New York and California.

Just as you have Georgia controlled by a select few deep-blue counties in the Peach State. 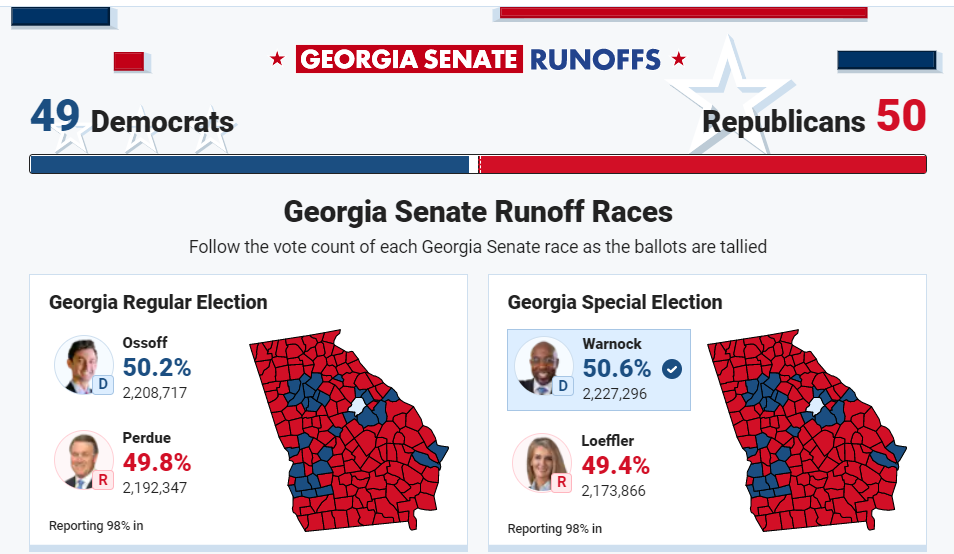 The New York Post editorial board recently penned a column urging President Trump and Republicans to focus their efforts on the Georgia senate runoffs.

“A Republican Senate can pressure Biden against returning to the old, failed Iran deal, can stop him from throwing open our southern border, will prevent him from packing the Supreme Court,” they wrote.

If the Democrats take the Senate, nothing stands in their way.

Biden meanwhile, made it clear that police reform would be a priority in his administration, though he urged Democrats to keep their desires to defund the police quiet until after the Georgia races had been called.

The list goes on and on – regulations that President Trump rolled back to unleash the economy would be put in full effect.

Granting statehood for DC and Puerto Rico, which would effectively put the Senate and the Presidency out of reach for the GOP for decades, would also get a boost.

Nationwide lockdowns and mask mandates could be on the table.

Peace deals that the President negotiated in the Middle East – once a dream thought impossible, for God’s sake – could very well be reversed by an American government overrun by radicals.

Last night, Georgia voted for a minimum of two years of destructive Democrat policies. In November, America voted for a President who would help facilitate those policies.

Now we must accept the inevitable. Welcome to mourning in America.