A new report indicates that the number of refugees being admitted into the United States has continued in a downward trend that started when President Trump took office.

Only 913 refugees were admitted into the country in August, the first time that number has fallen below the thousand mark in over 15 years. It marks the smallest number since October 2002.

As this chart from CNS News indicates, the numbers have dipped drastically – over 86 percent – from January, when Trump was inaugurated, to the most recent count in August. 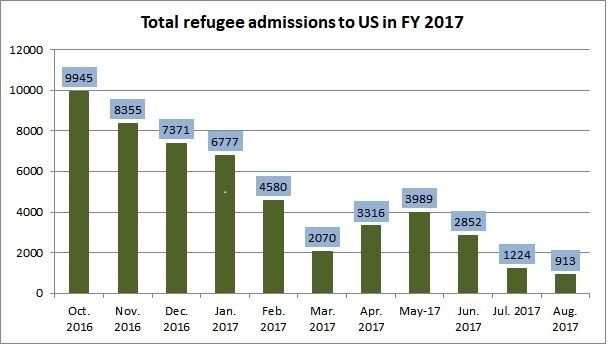 In addition, the Trump administration has implemented a long-overdue course correction on diversity of refugee admissions. The Obama White House focused almost exclusively on Muslim refugees, practically banning Christians from entry, with particular time period rates of 97+ percent for the former, and fewer than 1 percent for the latter religious group.

The President argued that the previous administration made it nearly impossible for Christian refugees to enter the country.

“If you were a Muslim you could come in, but if you were a Christian, it was almost impossible,” he said in an interview with the Christian Broadcasting Network. “I thought it was very, very unfair. So we are going to help them.”

Help them he has. Within days of assuming office, Trump ordered his administration to prioritize refugee applications from Christian minorities in Muslim countries.

Of the 913 refugees admitted in August, 60.3 percent of them were of the Christian faith, while 24.1 percent were practicing Muslims.

And, despite what the media would like you to believe, President Trump isn’t “barring” Muslim refugees from entering the country the way former President Obama practically did with Christians.

From January to August, the percentage of Christian refugees to Muslim sat at 51.6 percent to 37.0 percent.

The total number of refugees for the current year has now reached 51,392 – above the cap imposed as a result of budgetary constraints by Congress – and quietly lifted by the State Department back in May.

Jennifer L. Smith, a State Department official, wrote to agencies dealing with refugees worldwide that the groups could begin bringing people to the United States “unconstrained by the weekly quotas that were in place.”

While numbers have continued going down, the number of refugee admissions may begin going back up when budgets and time constraints are lifted.

Still, it would remain far lower than anything Obama attempted to implement when he purposely made an effort to increase the number of refugees admitted before Trump won the election by a whopping 86 percent.

I don’t think these reporters understand that Congress makes the laws. Even when Sarah told them That Congress has to give President Trump a Bill for his signature to replace DACA which ran out in March. Obama signed a time limited executive order! Obama was in office for eight years he should have handled it when he was in office. Call your Congress Rep. to get down to business. Just remember they have six months, and if it isn’t then nobody cared enough about it to get it into law.