Media Frets That Republicans May Shut Out, Ignore Them Going Forward

A new column by Vanity Fair openly frets that Republican politicians are more frequently “shirking” the media and wonders if the GOP will shut out the press in 2024.

“GOP politicians are increasingly shirking sit-down interviews, barring journalists from 2022 events, and skipping debates — an aversion to media scrutiny that could upend how the next presidential election cycle is covered,” writes reporter Charlotte Klein.

The worry is remarkably tone-deaf when one considers the fact that the current face of the Democrat Party, President Biden, has consistently avoided sit-down interviews, perpetually denigrated networks that might offer scrutiny, and spent much of his 2020 campaign locked in a basement.

Note to fact-checkers – Figuratively locked in a basement, not literally.

President Biden was praised by Democrats and the media alike for his ‘smart’ strategy of avoiding the media in the leadup to the last presidential election.

Now Vanity Fair wants to cry about Republicans potentially avoiding them in 2024?

Republicans “are increasingly shirking sit-down interviews, barring journalists from 2022 events, and skipping debates—an aversion to media scrutiny that could upend how the next presidential election cycle is covered,” writes @charlottetklein https://t.co/sCndzbyQQQ

Media Worried the GOP Will Shut Them Out in 2024

“After seven years of being open to the press,” Klein writes, some outlets were limited in access while more right-leaning sources were given “inside-the-room” access.

“Many local and national mainstream outlets were unable to get press credentials,” she somehow typed through the emotional trauma.

Klein reveals that Pushaw tweeted about “some liberal media activists” being mad because they weren’t allowed into the summit.

It was clearly meant to portray Pushaw as a terrible person for shirking the media but ends up revealing her incredible no-punches-pulled sense of humor.

“My message to them is to try crying about it,” Pushaw wrote. “Then go to kickboxing and have a margarita. And write the same hit piece you were gonna write anyway.”

Otherwise, as DeSantis spokeswoman Christina Pushaw tweeted Friday, “My message to them is to try crying about it. Then go to kickboxing and have a margarita. And write the same hit piece you were gonna write anyway.” https://t.co/HFt63dVoxE

RELATED: Even CNN’s Chris Cillizza Is Mocking the White House For Recession Spin: ‘I Was Laughing to Myself’

Of course, Pushaw is correct, with the premise of the Vanity Fair column itself being evidence.

For years, GOP lawmakers and politicians have made themselves available to far-left media outlets such as MSNBC, CNN, the Washington Post, and the New York Times to name a few.

Very few Democrats offer the same availability to one of the few right-leaning mainstream outlets in Fox News. Earlier this year, the President called a Fox News reporter a “stupid son of a bitch.”

But now the GOP limiting media access in 2024 is a threat to democracy … or something.

Wait, the current President practically held himself hostage in his basement during the last Presidential campaign and you’re worried about how things might change from the right next time? https://t.co/xOqmQJXxIP

President Joe Biden, during a press conference earlier this month, took only four questions from a pre-determined list of reporters and none of them asked about the number one concern amongst Americans – inflation.

Even CNN noticed the lack of media interest. 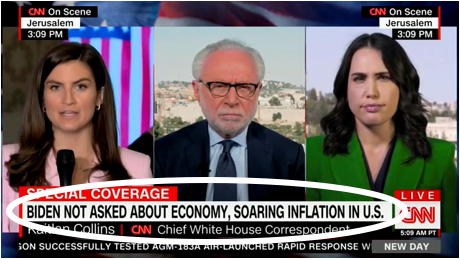 Biden’s last standalone press conference was almost 4 months ago, and he has only engaged in two interviews with the American press this year despite crises mounting left and right.

But it’s the Republicans who are stomping on Democratic and media access norms heading into 2024.