When Matt Drudge tweets, people take notice. He only ever sends one tweet at a time, and it’s never long before he deletes it and renders his profile blank once again. And on Tuesday morning, Drudge sent a tweet calling out journalist Michael Wolff, accusing him of spreading “fabricated bull****” about President Donald Trump. 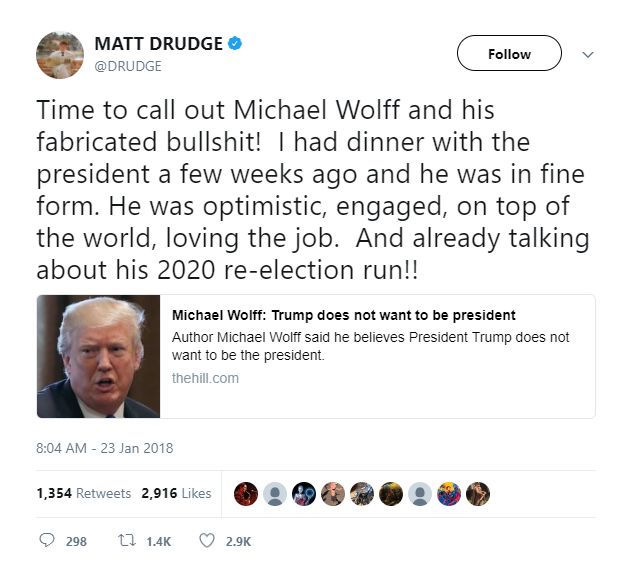 In his new book, “Fire and Fury: Inside the Trump White House,” Wolff claims that Trump was not expecting to beat Hillary Clinton — and that Melania Trump cried tears of sorrow when he did. However, Wolff also admitted to CBS This Morning that he didn’t interview any members of Trump’s Cabinet or the Vice President for his book. Instead, he got his intel from Trump’s fired chief strategist, Steve Bannon. Following the release of the book, Trump issued a statement that Bannon “has nothing to do with me or my Presidency,” and later nicknamed him “Sloppy Steve.”

Besides that, portions of Wolff’s book have already been debunked.

It’s really very sad that people are crawling out of nowhere in effort to capitalize on all the anti-Trump propaganda being spewed by the mainstream media. Donald Trump is a billionaire businessman — he wouldn’t have entered the presidential race if he didn’t intend on winning. But liberals still can’t deal with the fact that Trump is our president, so they turn to making up lies about him in order to cope.

As Trump would say: Sad!

Share this if you agree with Matt Drudge that Michael Wolff if full of it!